Journalist Juanita Ceballos’ camera was hit by a pepper ball while she covered protests against police violence in Louisville, Kentucky, on May 30, 2020.

Ceballos, a producer and cameraperson for VICE News, was filming with a colleague near Jefferson Square in downtown Louisville for several hours when police officers declared the demonstration an unlawful assembly and ordered protesters to disperse, she told the U.S. Press Freedom Tracker. Crowds of protesters were marching in response to the March 13 killing by Louisville police of Breonna Taylor, a 26-year-old Black woman, and the killing of George Floyd by Minneapolis police on Memorial Day.

At 8:25 p.m., while filming a line of police officers advancing toward a protester, Ceballos’ camera was hit by a pepper ball, she said, adding she was filming from the corner at a removed distance. After reviewing the footage of the hit to her camera — which wasn’t permanently damaged — she said she couldn’t be sure whether or not she had been targeted.

“I always make an intentional effort to look officers in the eye. If I have to move I will move,” she said. This time she hadn’t done so, she said, because she felt she was “far enough away that I was not in their way.”

Ceballos said she expected that her equipment and the press identification she was wearing made her clearly identifiable as a journalist. The night before, a reporter and photojournalist from Louisville TV station WAVE 3 were hit by pepper balls fired by police.

The Louisville Metro Police Department didn’t respond to a call and email from the Tracker requesting comment. Following the WAVE 3 incident, an LMPD official said officers have orders to not shoot pepper balls at members of the media.

Ceballos said that after the hit she felt threatened, not knowing whether the attack had been directed toward her or not. The journalist said she stopped filming for nearly half an hour, until she had cleaned the pepper powder off her lens, changed her N95 and gas masks and stopped coughing.

The staff of television station WHAS 11 was forced to briefly evacuate the station’s offices in Louisville, Kentucky, after the building’s windows were smashed during a protest on May 29, 2020.The protest was held in response to the killing of Breonna Taylor, a 26-year-old Black woman who was shot dead by police on March 13, as well as the May 25 police killing of George Floyd, a Black man, during an arrest in Minneapolis. Protests against police violence and in … 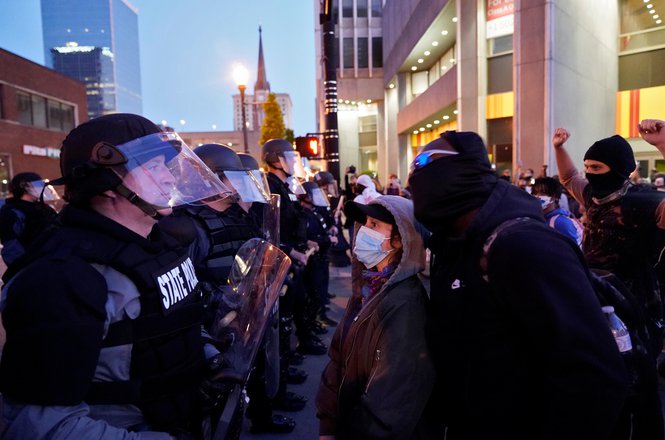 A news vehicle belonging to local broadcast station WAVE3 News was vandalized on May 29, 2020, during protests in Louisville, …

Two news vehicles belonging to local broadcast station WLKY News were vandalized on May 29, 2020, during protests in Louisville, Kentucky, according to the station.The Associated Press reported that protests in Louisville have centered around the deaths of Breonna Taylor and George Floyd, both of whom were black. Taylor was shot eight times in her Louisville home in mid-March by narcotics police who broke down her door. Floyd died on May 25, after a white police officer in Minneapolis, Minnesota, …
More related incidents