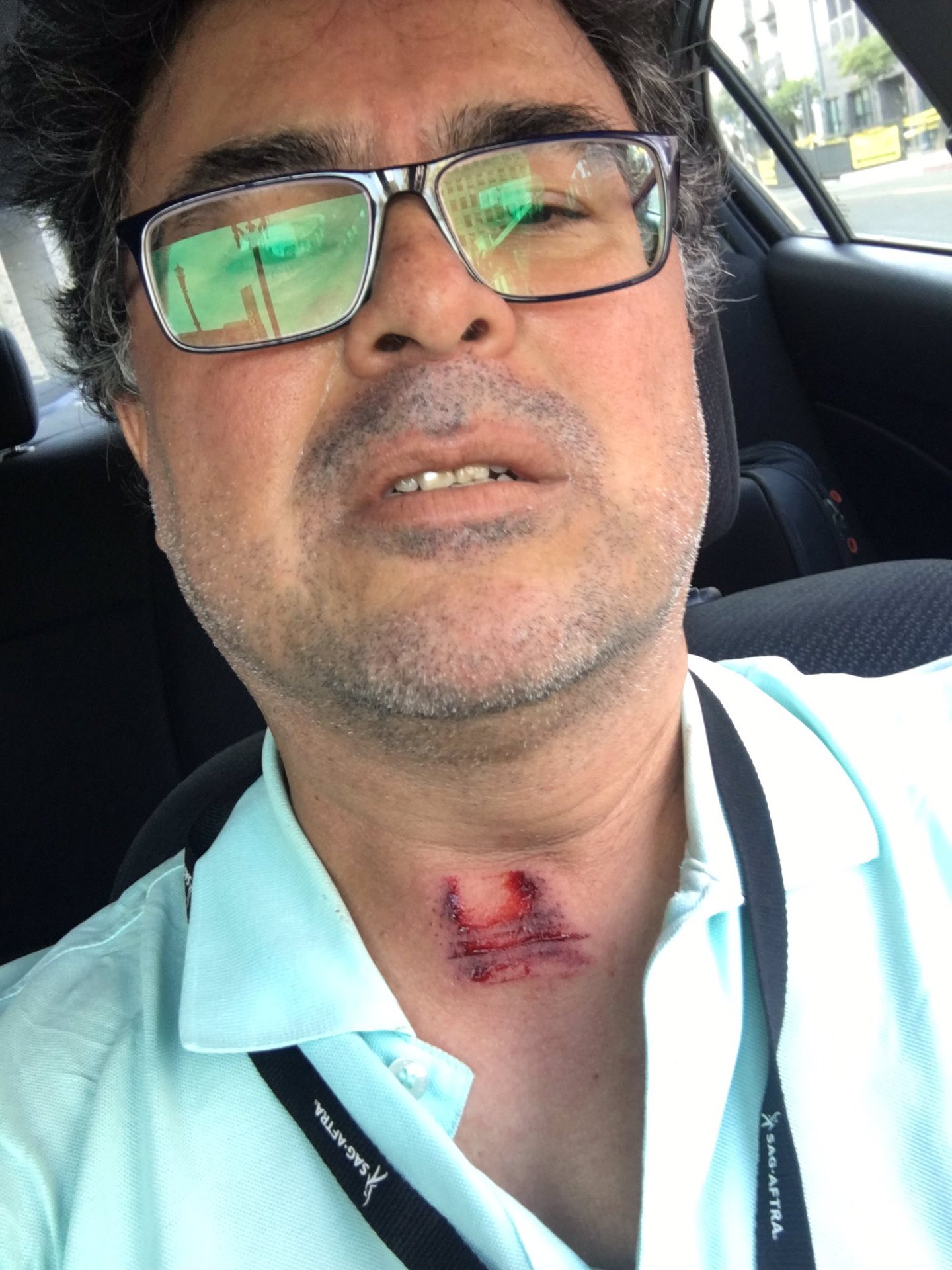 While covering Long Beach, California, protests on May 31, KPCC/LAist reporter Adolfo Guzman-Lopez was hit by a rubber bullet fired by police. He posted this selfie shortly after, and was treated at a hospital for the injury.

KPCC and LAist education reporter Adolfo Guzman-Lopez was shot in the neck with a rubber bullet while covering protests against police violence in Long Beach, California on May 31, 2020.

When reached for comment about the events of that day, Guzman-Lopez directed the U.S. Press Freedom Tracker to previous news coverage, including in the LAist; his tweets from the day; and an essay he wrote about the incident in July.

According to those accounts, at around 6:30 p.m. on May 31, Guzman-Lopez had been finishing an interview with a protester at the intersection of Third Street and Pine Avenue in Long Beach. He was one of only a few people standing in the area, as a crowd of about 200 protesters were on their knees while in a face-off with police, the LAist reported.

As he was typing the protester’s name into his phone, he recalled in an essay published by the LAist in July, he heard a “loud pop,” then felt an impact low on his neck. At that point, he wrote, he and others started running in the other direction.

The impact of the projectile left a bloody mark at the base of Guzman-Lopez’s neck, near his collarbone. At 6:40 p.m., he posted photos of himself on Twitter.

I just got hit by a rubber bullet near the bottom of my throat. I had just interviewed a man with my phone at 3rd and Pine and a police officer aimed and shot me in the throat, I saw the bullet bounce onto the street @LAist @kpcc OK, that’s one way to stop me, for a while pic.twitter.com/9C2u5KmscG

“I just got hit by a rubber bullet near the bottom of my throat. I had just interviewed a man with my phone at 3rd and Pine and a police officer aimed and shot me in the throat, I saw the bullet bounce onto the street,” he wrote. “OK, that’s one way to stop me, for a while.”

After he was struck, Guzman-Lopez went live on air on KPCC’s special coverage of the protests to report on what had happened. He noted in the clip that he was obviously conducting an interview at the time he was hit. He was also wearing credentials on a lanyard around his neck, though he observed that the credentials were not as bright as a previous version.

Guzman-Lopez went to the emergency room for treatment for his injury. A CT scan found the impact of the shot knocked the fillings from his teeth, according to an LAist article. He took four weeks off to recover.

“Regardless of whether I was targeted or not, being shot by a police foam round shook my life,” he wrote.

The LAist reported in July that Guzman-Lopez had been hit with a 40mm foam round fired by a Long Beach Police Department officer. According to the LAist, Police Chief Robert Luna told Guzman-Lopez that the department’s investigation found that he had been “inadvertently” struck by a round that had likely ricocheted off of something else.

Luna said that the department couldn’t determine which of two officers had fired the shot that struck the journalist, according to the LAist. Both officers fired rounds within four seconds of each other after two men threw bottles at police.

In a video briefing released on July 24 about the incident, the police department released footage from body cameras some officers were wearing at the time, though the cameras were partially blocked and do not show the full scene.

The videos show that two bottles had been thrown toward the line of police officers before the shots were fired, which prompted the crowd to disperse. Guzman-Lopez “was not the intended target” of the rounds, a narrator said on the police video.

As of late September, the department’s review of the incident was in its final phase, a spokesperson for the Long Beach Police Department told the Tracker.

The incident prompted apologies from local officials and attracted international attention. Long Beach Mayor Robert Garcia apologized to Guzman-Lopez following the incident, the LAist reported. Guzman-Lopez was among several journalists mentioned in a resolution the Los Angeles County Board of Supervisors passed on June 9 affirming the rights of journalists to cover protests and opposing the use of force against the press.

The protests in Long Beach that day were held in response to a video showing a white police officer kneeling on the neck of George Floyd, a Black man, during an arrest in Minneapolis, Minnesota, on May 25. Floyd was pronounced dead at a local hospital. Protests against police brutality and in support of the Black Lives Matter movement have been held across the United States since the end of May.