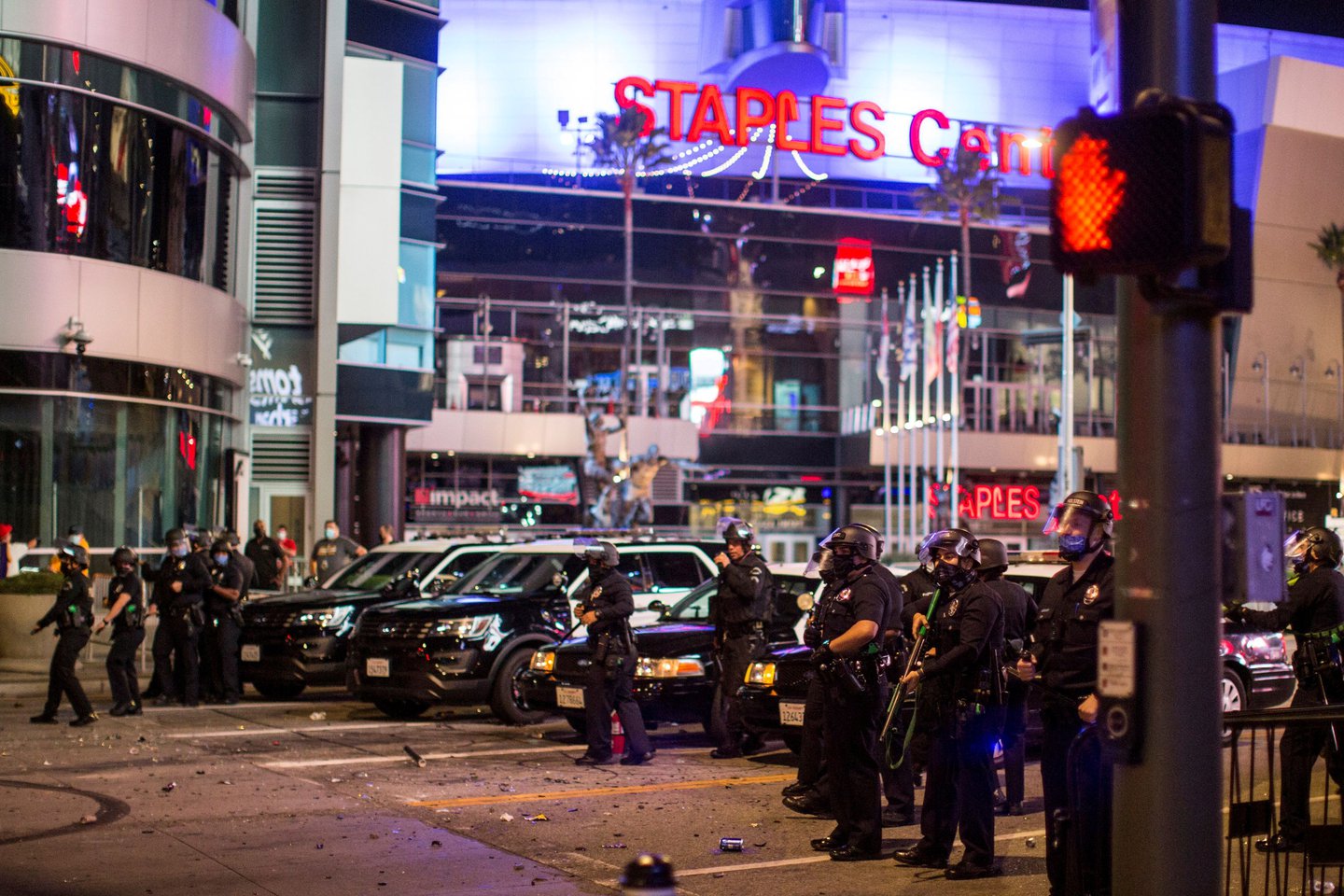 Los Angeles Police Department officers line up in front of the Staples Center as Lakers fans celebrate their team winning the 2020 NBA Championship on Oct. 11, 2020.

Samuel Braslow, a journalist for the Beverly Hills Courier, said Los Angeles Police Department officers hit him with crowd-control munition amid fanfare in downtown Los Angeles, California, on the night of Oct. 11, 2020.

Earlier in the evening, the Los Angeles Lakers had won the NBA championship, drawing thousands of celebrants outside the Staples Center. According to the Los Angeles Times, the festivities “quickly soured,” though, and “the scene devolved into another roving standoff between police in riot gear and throngs of people on the street.” Throughout the summer, Los Angeles and cities across the U.S. saw similar scenes, as thousands took to the streets to protest police brutality. The U.S. Press Freedom Tracker is documenting assaults, arrests and other incidents involving journalists covering protests across the country.

Braslow told the Tracker he arrived in downtown LA after LAPD officers had already started forming a skirmish line with officers in riot gear on foot and mounted police behind them.

“Even as people were complying and moving backward, LAPD officers continued firing less-lethal munitions at the crowd,” Braslow said.

At 9:43 p.m. on Oct. 11, Braslow posted footage of the advancing police line. Approximately 4 seconds into the clip, an officer on the left side of the frame appears to notice Braslow, aims his crowd-control firearm at the journalist and fires.

“Police aimed at me. Less lethal round literally hits my phone out of my hands (credit to apple, it kept recording),” Braslow wrote on Twitter.

Police aimed at me. Less lethal round literally hits my phone out of my hands (credit to apple, it kept recording) pic.twitter.com/TguhhlZXs7

Braslow told the Tracker he was holding his phone in front of the face when it was shot out of his hands, and said that it was clear officers were not following directives to aim crowd-control munitions at the ground or waist-level.

Braslow said he was wearing a Courier press badge and was carrying a large, professional camera around his neck. He said he was not injured and his phone was not damaged from the incident. He was able to continue posting live reports and footage until about 1:20 a.m.

“I was less surprised than I maybe should have been,” Braslow said, “and I just took it in stride.”

LAPD did not respond to a request for comment.