Radio reporter Philippe Leblanc was pushed with a baton by law enforcement officers while covering protests in Minneapolis, Minnesota, shortly after curfew went into effect on May 31, 2020.

Leblanc, a radio correspondent for Radio-Canada and television correspondent for French CBC, was standing behind the Minneapolis Police Department’s Fifth Precinct in a group of other Canadian journalists and their security details. Several of the reporters had flak jackets labeled “PRESS” and most were holding cameras and or other equipment, Leblanc told the U.S. Press Freedom Tracker.

Several Metro Transit buses with “not in service” lights on pulled up alongside the group and Minnesota State Patrol troopers disembarked, weapons drawn, and immediately began shouting at the assembled journalists to “Get back!” and “Move!” according to a video posted by Leblanc on Twitter.

The journalists complied, moving back, but the officers wielding batons kept coming toward them, Leblanc told the Tracker. “They started shoving us out of the way even though we had clearly retreated,” Leblanc said. “I was pushed three or four times on the chest.”

Leblanc, who was holding a microphone and his press pass in one hand and his iPhone in the other, said it was clear they were members of the media, but the situation unfolded so quickly he said he did not even have the chance to yell that he was press, though others in the group did.

Leblanc said he was not injured and that he did not file a complaint with state police. “Had there been an injury it would have been dealt with differently,” he said.

A request for comment emailed to the Minnesota State Patrol was not immediately returned. 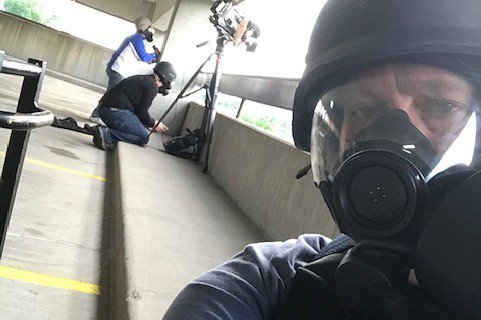