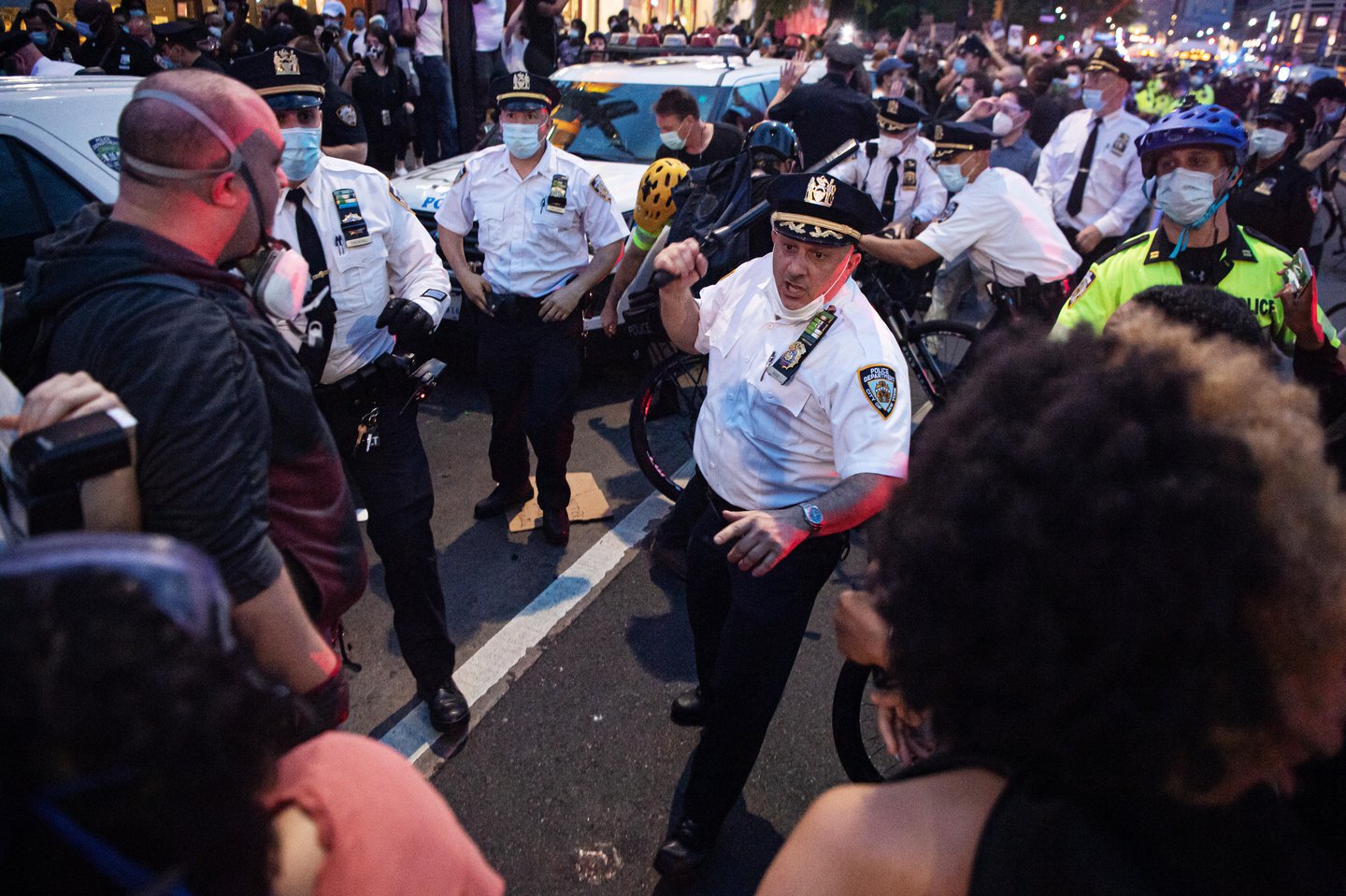 Photojournalist Joel Marklund captured this image on May 29, 2020 in the Brooklyn borough of New York City. Marklund said he was pepper sprayed, hit with a baton and had his camera broken while documenting protests that evening.

Joel Marklund, a photojournalist with the Scandanavian photo agency Bildbyrån, was hit by pepper spray and involved in an altercation with New York City Police that damaged his camera and left him bruised while covering protests in the borough of Brooklyn on May 29, 2020.

The protest at Barclays Center was one of many demonstrations sparked across the country by the May 26 release of a video showing a white Minneapolis police officer kneeling on the neck of George Floyd during an arrest the prior day. Floyd, a Black man, was later pronounced dead at a hospital.

Marklund, who has been covering the protests since they began, told the U.S. Press Freedom Tracker that this particularly large gathering numbered in the hundreds or thousands. Police contained the protest by using portable fencing. Around 7:15 p.m., as tensions between protesters and police intensified, officers picked up the fencing and used it to push the crowd back. They also began to “go wild” with the pepper spray, Marklund said, and some of it landed on him.

Goggles and a facemask protected Marklund from the worst effects of the spray. But he said the spray also hit his exposed neck and arms, leaving him with a burning sensation that lasted for five or six hours. Marklund was wearing press credentials around his neck, but said that he wasn’t targeted for being a journalist. “They didn't look to see if it was press or someone else,” he said of the officers.

Around 8:30 p.m. during the same protest, a police officer swung his baton near Marklund to force the crowd back. In the scrum, the photographer was struck by something — probably the baton, but he could not say for sure — that left a bruise the size of his hand on his stomach, he told the Tracker. Something also made contact with the lens and body of his camera. Marklund anticipated costly repairs to his camera but expected his insurance to cover most of the expense.

“The police were very, very aggressive,” Marklund told the Tracker. “They’ve been shoving me and other media every single night. It's been very intense, but we haven't been close to what I see other photographers and media have experienced in other cities where they’ve been shot at [with projectiles]. But it's definitely been an aggressive atmosphere where it doesn't really matter if you're press or not.”

Independent journalist Janet Burns said she was shoved by a police officer while covering a protest in New York City on July 25, 2020.Burns said she was covering a demonstration that night in Lower Manhattan, at the corner of Delancey and Ludlow streets, for NYC Protest Updates 2020, a Twitter account set up by a group of young journalists after the May killing of George Floyd in Minneapolis sparked nationwide protests. The Twitter account has over 40,000 followers and provides …
More related incidents