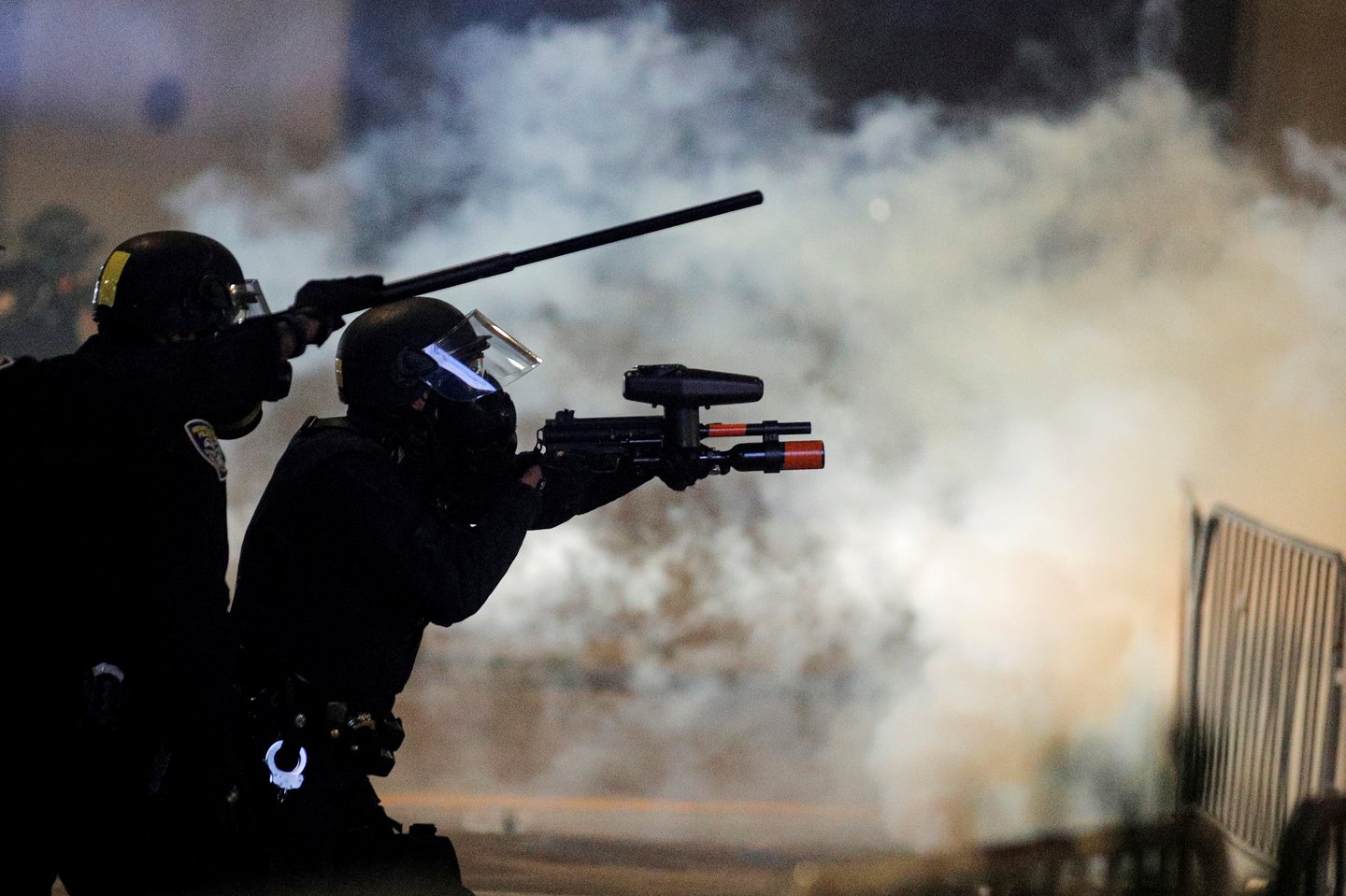 Police officers in riot gear fire pepper balls during a protest over the death of Daniel Prude in Rochester, New York on Sept. 5, 2020.

An independent photojournalist says police fired pepper balls at him and detained him on Sept. 5, 2020, while he was covering protests in Rochester, New York.

Mustafa Hussain said he was detained after photographing protesters getting tackled during a demonstration protesting the death of Daniel Prude, whose killing in Rochester was ruled a homicide after police physically restrained him. Prude died by asphyxiation in police custody in March 2020, but details surrounding his death only came to light after police body camera footage was released by his family on Sept. 2.

Sept. 5 was the fourth straight night of protests in Rochester, and the scene was chaotic, Hussain said, as police officers clashed with protesters downtown near the Blue Cross Arena.

“On video…from what I saw, RPD [Rochester Police Department] fired the first round and engaged first…at that point they opened fire on the protesters,” Hussain told the Tracker. According to the Rochester First news site, police said some in the crowd had fireworks and threw bottles at officers. In response, the site said, police fired pepper balls and tear gas at protesters.

“Then they deliberately were aiming at press as well, we were getting shot at, there was tear gas everywhere,” Hussain told the Tracker.

Hussain said he was within a group that should have been easily identified as press, because they wore press helmets and badges and some carried large, professional cameras.

Despite all the markings, he said he was hit numerous times by pepper balls, resulting in welts and bruises on his arms and legs. Hussain said his torso was protected by a ballistic vest. He said he received first aid from street medics for the effects of tear gas and pepper balls.

“I do believe RPD intentionally fired upon press to prevent us from doing our job,” Hussain told the Tracker.

Later on that evening, Hussain said he watched as police “were chasing young protesters and tackling them to the ground.” He said he moved to the middle of the street to get a better photo angle, “and it was at that point that two officers came and grabbed me and took me to the ground and arrested me,” Hussain told the Tracker.

Hussain said he was near the Kodak Tower downtown, with two other journalists, one of whom captured Hussain’s detainment and posted it on Twitter. Georgie Silvarole, from USA Today, took pictures that showed Hussain lying on the ground with officers hovering over him, Hussain in handcuffs and another picture that showed an officer confiscating Hussain’s backpack and camera.

He went across the street to get a better angle of the protesters standing in the intersection and was tackled by police. They put him in the back of a squad car, and placed his cameras and backpack in a plastic tote. pic.twitter.com/00F2I6lCSD

“They dragged me to the ground,” Hussain said, describing the event as “very abrupt” and “very shocking.”

Hussain said he was not wearing press credentials, but he had his cameras with him and told police he was press.

Officers put Hussain in the back of a police car, he said, and while he was detained, they drove around and tried to arrest someone else. When the car headed to the police station, “They got a call from a supervisor, or a Rochester Police public relations officer,” Hussain said. “They were pretty much given an earful for arresting a member of the press.” Hussain said he believes that someone from the Democrat and Chronicle, a Rochester newspaper, had called the police department on his behalf. “So they let me go,” he said, releasing him from custody near his car and returning his photo equipment.

Hussain said he opted not to file a complaint about his detainment. “As a journalist this is not about me,” he said. “I wasn’t beaten, they could have tackled me and they could have put their knee on my neck.” But they did not, he said, “so I didn’t feel that I needed to bring more attention to it.”

The Rochester Police Department did not respond to a request for comment on Hussain’s case.

Daniel Prude’s death on March 30 took place almost two months before the death of George Floyd on May 25. The U.S. Press Freedom Tracker is documenting assaults, arrests and other incidents involving journalists covering protests across the country in the aftermath of these and other killings.

Russian freelance journalist Yana Mulder was reporting on protests in the New York borough of Brooklyn on June 4, 2020, when she was arrested while trying to intervene in the violent arrest of her husband. Mulder said she told police that she was press and that her husband was assisting the TV production crew.The protest came one day after New York City Mayor Bill de Blasio imposed an 8 p.m. curfew aimed at controlling escalating unrest in the city. Essential …
More related incidents