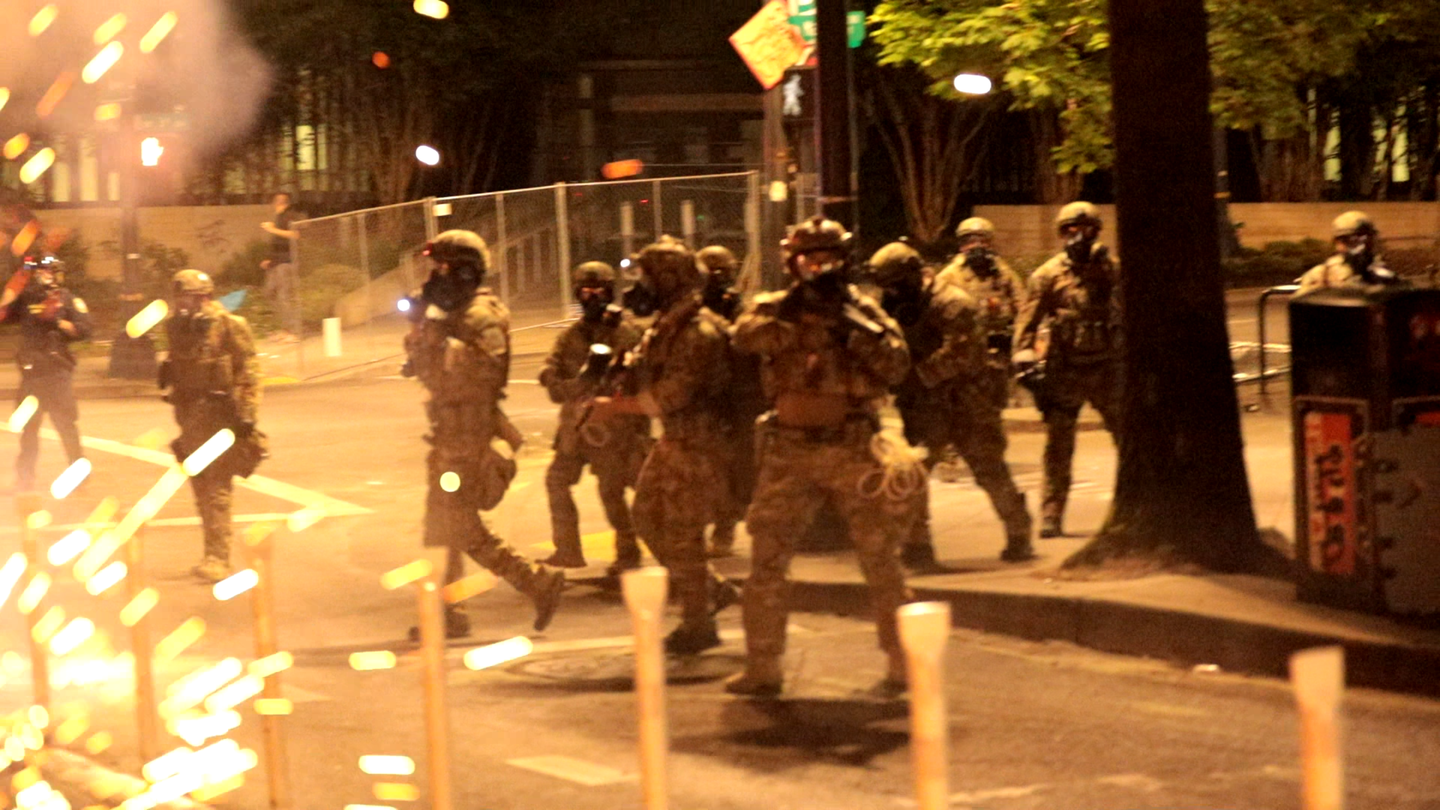 While documenting July 18, 2020, protests in Portland, Oregon, videographer Mason Lake said federal law enforcement officers were aiming for the press. “They threw tear gas canisters and flash bangs right at us,” he said.

Portland: While reporting on protests in the city, journalists tear gassed, threatened

George Floyd’s death in Minneapolis on May 25, 2020, ignited a sweeping assembly of protesters across the United States — and the globe — a staggering, monthslong outcry for police reform and racial justice. In many moments peaceful, in many others bracingly violent, journalists of all stripes took to documenting these demonstrations. At times, to do the job meant to expose oneself to the effects of riot-control agents, to face harassment from individuals or law enforcement officials, to fear for your safety or have your reporting interrupted.

In Portland, Oregon, the protests have been particularly acute, not only in their duration, but also their intensity. Not coincidentally, the journalists who’ve documented the unfolding events have seemingly faced a heightened level of risk, most notably in their interactions with local and federal law enforcement. In response, the American Civil Liberties Union Foundation of Oregon filed a class-action lawsuit in June “on behalf of journalists and legal observers who were targeted and attacked by the police while documenting protests.” The suit led to an agreement by the Portland Police Bureau in July not to arrest or harm any journalists or legal observers of the protests or impede their work. A judge later expanded the ban to federal officers, who were a heavy presence in the city until Oregon Governor Kate Brown negotiated a phased withdrawal with the Trump administration in late July. While an appeals court later issued a temporary stay on that order, the federal ban was reinstated in early October.

Below is a roundup of incidents involving journalists in Portland getting tear-gassed, threatened or somehow impeded in their work in the city beginning summer of 2020.

A full accounting of incidents in which members of the press have been assaulted, arrested or had their equipment damaged while covering protests across the nation can be found here. To learn more about how the U.S. Press Freedom Tracker documents and categorizes violations of press freedom, visit pressfreedomtracker.us.

Last night a member of my crew was almost rammed by a red truck (newish, likely Ford) with an American flag flying from each end of the back. The police aimed their guns at her when she tried to get its plate #.

If any member of the crowd filmed this, please let me know.

An officer shouts "You were standing taking photos..." as two people hiding behind a car are arrested. Another officer threatens me with arrest as I clearly state I am press as I move back and comply with orders. pic.twitter.com/fwTStAsceO

Portland police officer “your asked to disperse, wearing the press does not give you the right to be here”

Police: “you’ve been given warnings, so if you don’t move faster your gonna go to jail”

A few officers sprint forward to make an arrest and as I document I am threatened with arrest. pic.twitter.com/nVRcwvEmXi

I got LIT UP last night! New riot gear paid for itself already. The feds were ABSOLUTELY targeting media & press.
I was not the only one. Let me tell you something, nothing turns your blue pants brown like militarized police pointing at you!!!
😳😳😳 pic.twitter.com/PEYLIMdDOd

A PBB officer told me to “go home” another said “get the fuck out”, I pointed to my credentials and said “press”, the officer said “I don’t care.” But they drove off without saying anything else.

Officers shove protestor who's trying to leave. Then threatened @TheRealCoryElia, me, and 10+ other legal observers / press for filming pic.twitter.com/ME3vKMcyp2

Got lost from the rest of press group officer ran up to me, I yelled press and he yelled "nope" and started running at me. Pretty sure this isn't legal.

Tonight I was coated in mace by the feds three times to the point I had to leave cause everything about me was sticky. I *just* did laundry today too...

Any tips on things I can do or buy to increase the number of macings before I need to leave and shower??

The police form a riot line, they tell press to leave the area, we were on the sidewalk. #blacklivesmatter    #protest #pdx #Portland #Oregon #BLM #acab #PortlandProtests #PDXprotests #PortlandStrong pic.twitter.com/ixMA27i7k1

A cop walks up close to me and @IwriteOK and threatens us with pepper spray. #blacklivesmatter     #protest #pdx #Portland #Oregon #BLM #acab #PortlandProtests #PDXprotests #PortlandStrong pic.twitter.com/gFabrZ9bAL

Here we see, from a bit earlier, how the police tried to justify their illegal dispersal. They claim it is NOT a dispersal, but a road closure. So they can legally force journalists off.

I do not think this would hold up in court. Which is probably why they left. pic.twitter.com/7kLa5BnhUY

A cop tells us we're all under arrest

Then the line loads up on their riot van and leaves

I live in a Tom and Jerry cartoon

Just tried to walk up to the group of protesters and a police officer blocked me from covering, saying “M’am, I’m not having this conversation. For the last eight weeks I’ve had press throwing things at me and calling me names. So you will have to go around the block.”

Portland police tell press that talking to officers is illegally engaging them. They shove press for not being on the sidewalk even though they were, they then tell them to "be press" on a different sidewalk. They assaulted legal observers and press following orders all night. pic.twitter.com/lDHNxvVMIw

“If you’re in the street again, you’re going to jail. Period,” one officer says as a chase ends and I get back onto the sidewalk.

A different officer pulls on my left arm as I walk forward, then says: “Stay on the sidewalk.” pic.twitter.com/xoxOmx1nKG

The Portland Police have declared a riot. They are warning "media and press" that they are ordered to disperse. This is a violation of the Federal Restraining Order. pic.twitter.com/BYVLPjrMtu

Police make another arrest, then run up on press trying to film #PortlandProtests #Portland #PortlandRiots pic.twitter.com/bFMiX6L3cK

Here I am getting menaced by the cops for doing what they told me to do. pic.twitter.com/Vpwm04hCyz

We are on the sidewalk against a building. Also police cannot disperse press due to the federal TRO that is still in effect for PPB. #PortlandProtests #BLM #PDX #BlackLivesMatter  #portland pic.twitter.com/TrTR3ZAS6U

It looks like the far-right portion of today is over, at least

I'm not a big selfie person: not my style. But I'm posting this one so you can see exactly what I looked like when I was threatened

I am not in bloc. I am wearing a press pass pic.twitter.com/ub2em1TSVH

D.C. police fire crowd-control round past journalist’s head during protest

George Floyd’s death in Minneapolis on May 25, 2020, ignited a sweeping assembly of protesters across the United States — and the globe — a staggering, monthslong outcry for police reform and racial justice. In many moments peaceful, in many others bracingly violent, journalists of all stripes took to documenting these demonstrations. At times, to do the job meant to expose oneself to the effects of riot-control agents, to face harassment from individuals or law enforcement officials, to fear for …