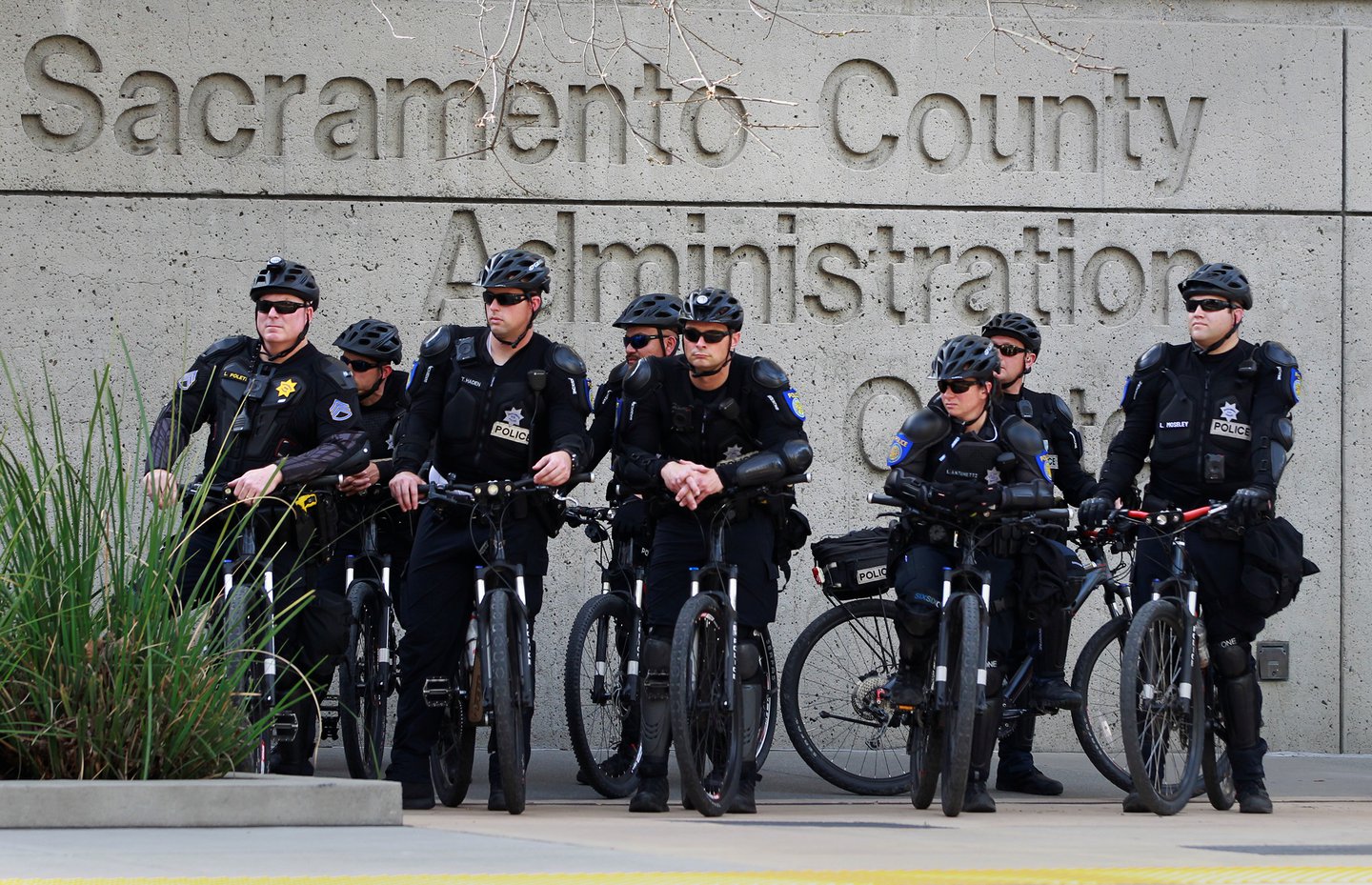 Police officers in Sacramento, California, watch protesters last March after the funeral of Stephon Clark. This year’s protest followed the announcement that officers involved in the shooting of the young black man wouldn’t be charged criminally.

Sacramento photojournalist pushed to the ground by police while covering protest, his camera damaged

A Sacramento police officer shoved Sacramento Bee Senior Photographer Hector Amezcua to the ground with his bicycle during a protest on March 4, 2019, breaking his equipment and interrupting his broadcast.

More than 100 people gathered in a Trader Joe’s parking lot around 6:30 p.m. that day to protest the district attorney’s decision not to bring criminal charges against the officers who shot and killed Stephon Clark, a 22-year-old black man, last March. After about two hours, the march circled back to the parking lot where it had begun.

Protest organizers also encouraged people to leave, NPR reported, and many did. Soon after that, a row of officers in riot gear formed a line and began slowly advancing, leaving only one exit for those remaining: Down 51st Street.

Amezcua told the U.S. Press Freedom Tracker that he was broadcasting a livestream as officers on bicycles began pushing marchers into a flower bed next to a large Trader Joe’s sign. “As I hugged the corner of the sign with my right shoulder I felt bicycle officers closing in on me. I felt an officer hit me with his bike from my left side,” Amezcua said. “I lost my balance for a second and looked into [the] officer’s face as I turned. He screamed, ‘I told you to get out of the way,’ I assume as motive for hitting me.”

He wasn’t aware that his camera had been damaged in the collision until his colleague Sam Stanton walked up to him to tell them they were no longer broadcasting live. The HDMI port and cable on his Nikon Z-6 camera were broken.

The Bee reported that the assault was witnessed by National Lawyers Guild legal observers at the scene as well as Bee journalists.

Amezcua stayed behind at the shopping center where his company car was parked as officers on bikes and in riot gear began circling the protesters and forcing them on to 51st Street. When he and Stanton switched the live feed to his cell phone they continued reporting, staying around 20 feet behind the officers who continued cordoning the protestors onto the Highway 50 overpass. A line of officers, initially out of view of the protesters, was waiting at the end of the bridge.

“As we walked closer we observed a large group of people on the overpass at 51st Street and Highway 50 surrounded by police officers on bikes and riot police with nowhere to go,” Amezcua said. “At this point I noticed our colleague Dale Kasler among those in the group.”

The Bee reported that 84 people were arrested over the next four hours. The Tracker documented the arrests of three journalists, including Bee reporter Kasler, Sacramento Business Journal reporter Scott Rodd and student journalist William Coburn.

Amezcua told the Tracker that he believes that he, Stanton, and other journalists from Univision, KCRA, NPA and ABC 10 were not arrested because they had not stayed with the group that was corralled at the end of the overpass.

Kettling — surrounding protesters in order to prevent any exit, often followed by indiscriminate detentions and arrests — is used across the country as a protest response despite the risk it poses to journalists covering the protest.

Amezcua told the Tracker that people have asked him why they stayed after orders were given to disperse. “My response has been Section D of California PC 409.5,” Amezcua said.

That section of the penal code allows for any member of the news media to remain after orders to clear an area have been given.

Sacramento Business Journal reporter Scott Rodd was one of three journalists arrested on March 4, 2019, in Sacramento, California, as police blocked off exits and began arresting those remaining at a protest march.Sacramento Bee reporter Dale Kasler and California State University student reporter William Coburn were also arrested. A Bee photojournalist, Hector Amezcua, was shoved to the ground by a bike officer when police began to cordon protesters.About 100 people gathered around 6:30 p.m. in East Sacramento to protest the … 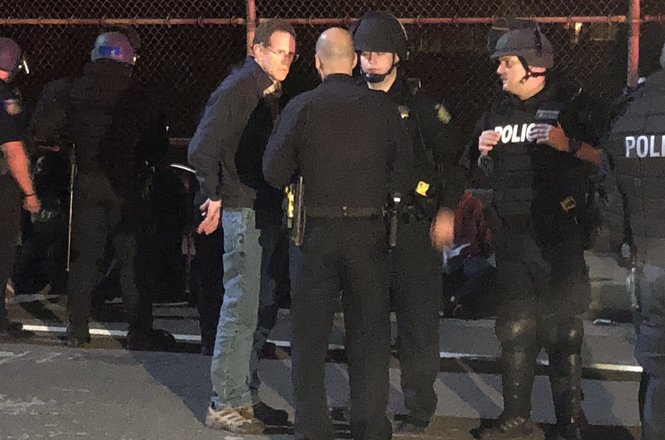 Sacramento Bee reporter Dale Kasler was one of three journalists arrested on March 4, 2019, in Sacramento, California, as police …

Two Sacramento Bee journalists were assaulted and their work equipment damaged and stolen while covering protests against police violence in downtown Sacramento, California, on May 31, 2020.SacBee photojournalist Paul Kitagaki Jr. was reporting that night with colleague reporter Sam Stanton. The pair had been following protests at the state Capitol, which law enforcement had dispersed with flash-bang grenades and tear gas at around 11:30 p.m. As the crowd broke up, Kitagaki and Stanton left the area, soon walking past a …

Independent videographer Sean Beckner-Carmitchel was assaulted while documenting an anti-vaccination protest in Los Angeles, California, on Dec. 18, 2021.Beckner-Carmitchel told the U.S. Press Freedom Tracker he arrived shortly after 1 p.m. to document an anti-vaccination mandate protest outside Getty House, the official home of Los Angeles' mayor. Approximately 10 protesters were gathered outside the residence, Beckner-Carmitchel said, and he initially intended on only documenting the demonstration for 30 minutes or so.An individual approached the journalist at around 1:20 p.m., upset …
More related incidents