Reporter Scott Rodd received a letter from the Sacramento Police Department informing him that the status of his arrest was being changed to a detention.

Received letter from Sac County DA confirming it will not pursue charges for arresting me while covering the March 4 Stephon Clark protests as a member of the media.

The letter, dated April 11, 2019, also said the department would retain any fingerprint records on file.

Sacramento Business Journal reporter Scott Rodd was one of three journalists arrested on March 4, 2019, in Sacramento, California, as police blocked off exits and began arresting those remaining at a protest march.

About 100 people gathered around 6:30 p.m. in East Sacramento to protest the district attorney’s decision not to bring criminal charges against officers in the 2018 shooting death of Stephon Clark, a 22-year-old black man. The march proceeded uneventfully and eventually circled back to where it had begun, in a Trader Joe’s parking lot in the Fab 40s neighborhood.

Protest organizers also reportedly encouraged attendees to leave, and many did. Soon after, however, a row of riot gear-clad officers formed a line and began slowly advancing while vans of bicycle officers blocked all side roads, leaving the only exit down 51st Street.

In a video Rodd shared on Twitter, police officers informed those present that they would be able to leave if they continued down 51st toward the overpass.

But the city and PD are pursuing several investigations into what happened. I captured the protests at a pivotal moment when riot police were deployed.

The Bee reported that 84 people were arrested over the next four hours.

Rodd and Coburn were among those zip-tied and left sitting on a curb for 2 ½ hours before police loaded them into vans heading to Cal Expo, a state fair ground, to be processed. The Bee’s Kasler was also zip-tied and detained, but released with a certificate of “arrestee exonerated.”

I also captured when police encircled protesters on the Highway 50 overpass after directing the group down 51st Street.

The video shows the moment police began arresting protesters--starting with several clergy members--and ends with my own arrest.

Rodd was wearing a black T-shirt with “PRESS” in bold, white letters across the front and back, and a hat displaying Sacramento Business Journal credentials. Rodd told his arresting officer and a second officer at the scene that he was a reporter, but neither reacted. Then, he said, he tried to continue doing his job.

“I started asking one of the officers questions about what precipitated the arrest, what situation made them decide that they needed to arrest people,” Rodd told the Tracker. “After a few questions the officer said, ‘I can’t answer those questions because you’re a member of the press and I’m not at liberty to talk about it.’ He acknowledged that I was a member of the press and I was there, I was in flexicuffs, I was detained, and it looked like I was going to be processed.”

After more than four hours in detention, Rodd was released around 2:30 a.m. on March 5 with a ticket for failure to disperse and a court hearing scheduled on June 4.

The Sacramento County district attorney’s office announced a few days later that it would not charge those arrested at the protest, the San Francisco Chronicle reported. Sacramento's police department and public safety accountability office are conducting ongoing internal investigations into the police tactics used during the protest, The Bee reported.

Kettling — surrounding protesters in order to prevent any exit, often followed by indiscriminate detentions and arrests — is used across the country as a protest response despite the risk it poses to journalists covering the protest. 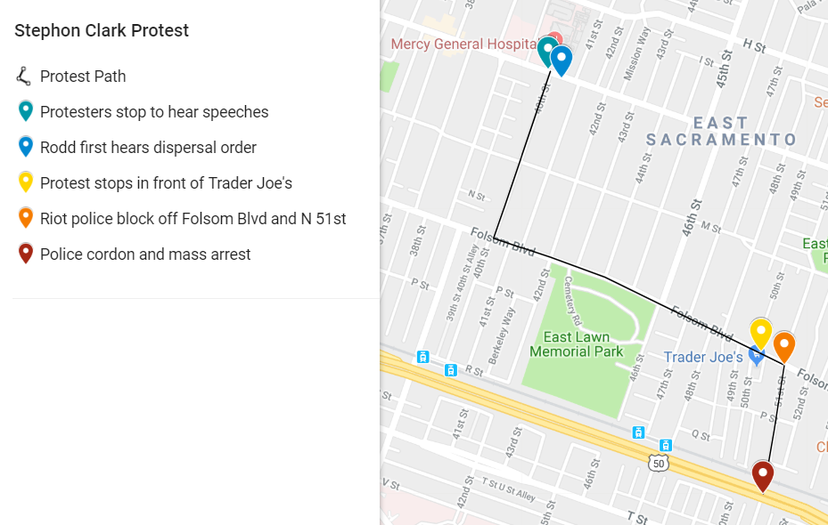 Journalist Scott Rodd created a map of the events around the protest and subsequent arrests. Key coloring and descriptions updated by the Tracker.