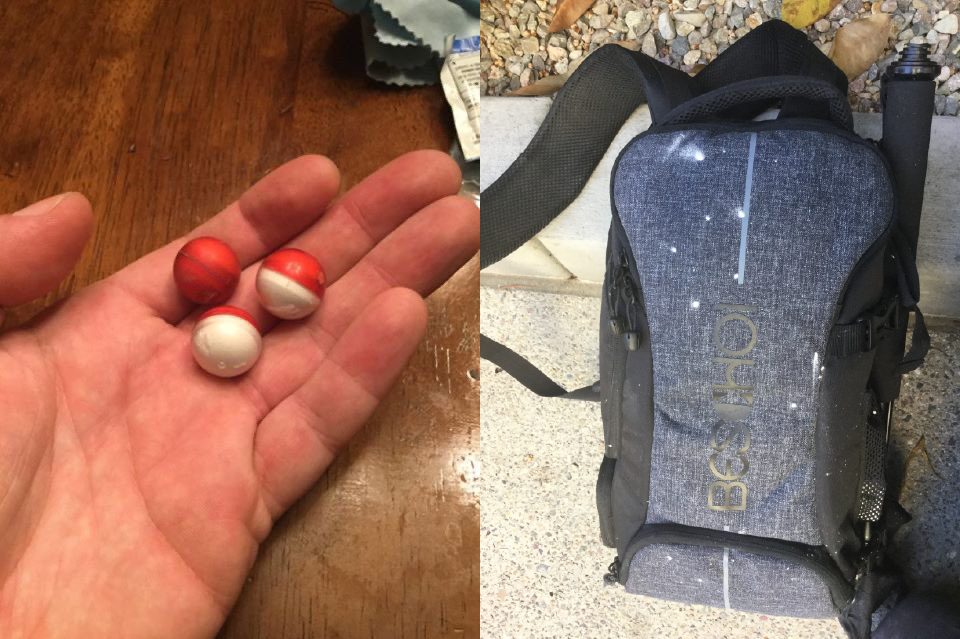 Journalist JoseLuis Baylon shows pepper balls and residue on his camera bag from covering a protest in downtown San Diego on May 31, 2020.

Journalist JoseLuis Baylon was hit by tear gas and projectiles while covering a San Diego protest on May 31, 2020. Baylon is a columnist for East County Californian and his campus newspaper The SWC Sun, but was covering the protest as an independent reporter.

The protesters were standing in front of Spreckels Theatre at 121 Broadway in downtown San Diego facing a line of San Diego Police Department officers, Baylon told the U.S. Press Freedom Tracker. At 3:19 p.m. the SDPD tweeted, “Unlawful assembly order being given in the area of Broadway. We are asking everyone to disperse immediately due to the escalation of violence by the protestors.”

Baylon was standing on a ramp in front of a business near the police line. “At one point the officers started putting on their gas masks and then the crowd started saying to themselves ‘hey, watch out, they’re getting ready.’ A lot of people didn’t know, but those that got the word started moving back,” he said.

At 3:10 p.m. Baylon recorded a video that appears to show SDPD firing pepper balls and flash-bang grenades at the protesters. In the recording Baylon says, “We’re all coughing, it’s everywhere.”

At 3:41 p.m. Baylon tweeted a video that he began recording at 3:19 p.m. Tear gas appears to blow back toward where Baylon is standing. He ducks behind a railing and moves away from the street, eventually taking shelter among overturned patio tables and pouring milk in his eyes. A badge identifying him as press is visible on a lanyard around his neck. “As we’re crawling to get out, we’re still shot,” Baylon said of the video. “I’m nowhere near where the protesters were.”

The video lasts one minute and forty-eight seconds, Baylon estimates he was in the line of fire for forty seconds of that. The SDPD repeated the same crowd-clearing tactics throughout the afternoon. SDPD didn’t respond to a request for comment.

The U.S. Press Freedom Tracker is documenting several hundred incidents of journalists assaulted, arrested, struck by crowd control ammunition or tear gas or had their equipment damaged while covering protests across the country related to the death of George Floyd while in police custody. Find all of these cases here.

Len Ramirez, a news reporter for KPIX 5 News, was shot in the back with a rubber bullet on May 29, 2020 while covering a protest in downtown San Jose, Calif.The protest was part of a wave of Black Lives Matter and anti-police brutality demonstrations across the country sparked by the release of a video showing a white Minneapolis police officer kneeling on the neck of George Floyd, a Black man, during an arrest. Floyd was later pronounced dead in …

Independent journalist James Stout said he was pepper sprayed and pushed with a club by police while he was covering a protest in San Diego, California on Aug. 28, 2020.Demonstrators gathered in San Diego in the days after Jacob Blake, a Black man, was shot by police in Kenosha, Wisconsin on Aug. 23, the San Diego Union-Tribune reported. Protests against racism and police brutality had been held across the country for months, sparked by the May 25 killing of George …