Independent journalist Naasir Akailvi, of the Minnesota-based social media news outlet the Neighborhood Reporter, said he was detained while covering a protest in Brooklyn Center, Minnesota on April 14, 2021.

Demonstrations were held several days in a row outside the Brooklyn Center Police Department in response to the fatal police shooting of Daunte Wright, a 20-year-old Black man, during a traffic stop on April 11. Wright’s death occurred as a former police officer in nearby Minneapolis was on trial in the death of George Floyd, rekindling a wave of protests against racial injustice and police brutality that had started nearly a year earlier.

Akailvi and Gunapalan were returning to their car late on the night of April 14 as the protest was winding down, they told the Tracker. As they were moving away from the police department, close to a nearby church, a group of people were tapping on the windows of law enforcement vehicles and going up to officers, so Gunapalan said the pair stopped to film the interaction.

Suddenly, she said, a line of MSP troopers started running up the street toward them. Gunapalan said the journalists held up their camera and microphone and yelled to identify themselves as press, but the troopers shouted at them to move, so they turned and started running.

Akailvi told the Tracker that as he was running, troopers grabbed him and pushed him to the ground. As he was taken down, he said, a trooper pulled his microphone out of his hand. As his backpack was taken off of him, a battery pack fell out, he said.

Akailvi said he was restrained on the ground with a trooper on top of him, and his hands were restrained in cuffs.

He said he told the troopers that he was press and had a press pass around his neck. Akailvi said a trooper got in front of him and said, “That doesn’t always work, does it?” When he asked another trooper to speak with a supervisor, he said the trooper responded, “You can get the fuck out of here.”

Akailvi said troopers brought him over to where Gunapalan and another independent journalist, Niko Georgiades of Unicorn Riot, were also detained.

The Minnesota State Patrol did not respond to a request for comment.

On April 16, a federal judge issued a temporary restraining order barring Minnesota State Patrol from arresting or threatening to arrest journalists. In a statement in response to the court order, MSP acknowledged that the agency is prohibited from enforcing dispersal orders against journalists.

The U.S. Press Freedom Tracker documents journalists assaulted, arrested, struck by crowd control ammunition or tear gas or who had their equipment damaged in the course of reporting. Find all incidents related to Black Lives Matter and anti-police brutality protests here.

At least 15 journalists were detained by police while covering protests in Brooklyn Center, Minnesota, on the night of April 16, 2021, according to reports given to the U.S. Press Freedom Tracker, noted on social media or published in other news outlets.Several hundred protesters marched to the Brooklyn Center Police Department in response to the fatal shooting of 20-year-old Daunte Wright, a Black man, by a white police officer during a traffic stop. Wright’s death, on April 11, occurred as …

Two Minneapolis Star Tribune photojournalists were among a group of journalists detained by police while covering protests in Brooklyn Center, Minnesota, on the night of April 16, 2021, according to reports shared with the U.S. Freedom Tracker, or published on social media or other news outlets.Several hundred protesters marched to the Brooklyn Center Police Department in response to the fatal shooting of 20-year-old Daunte Wright, a Black man, by a white police officer during a traffic stop. Wright’s death, on … 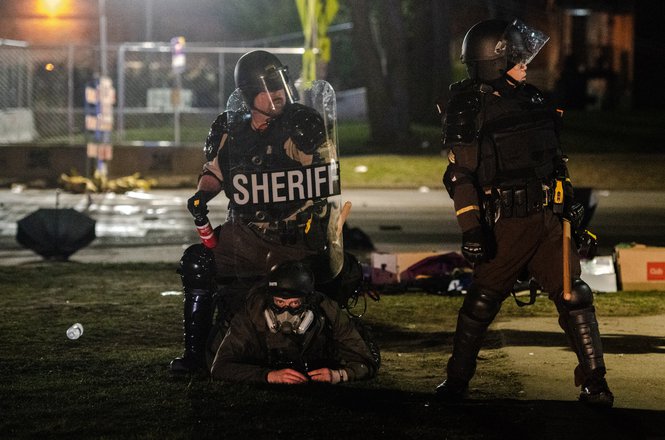