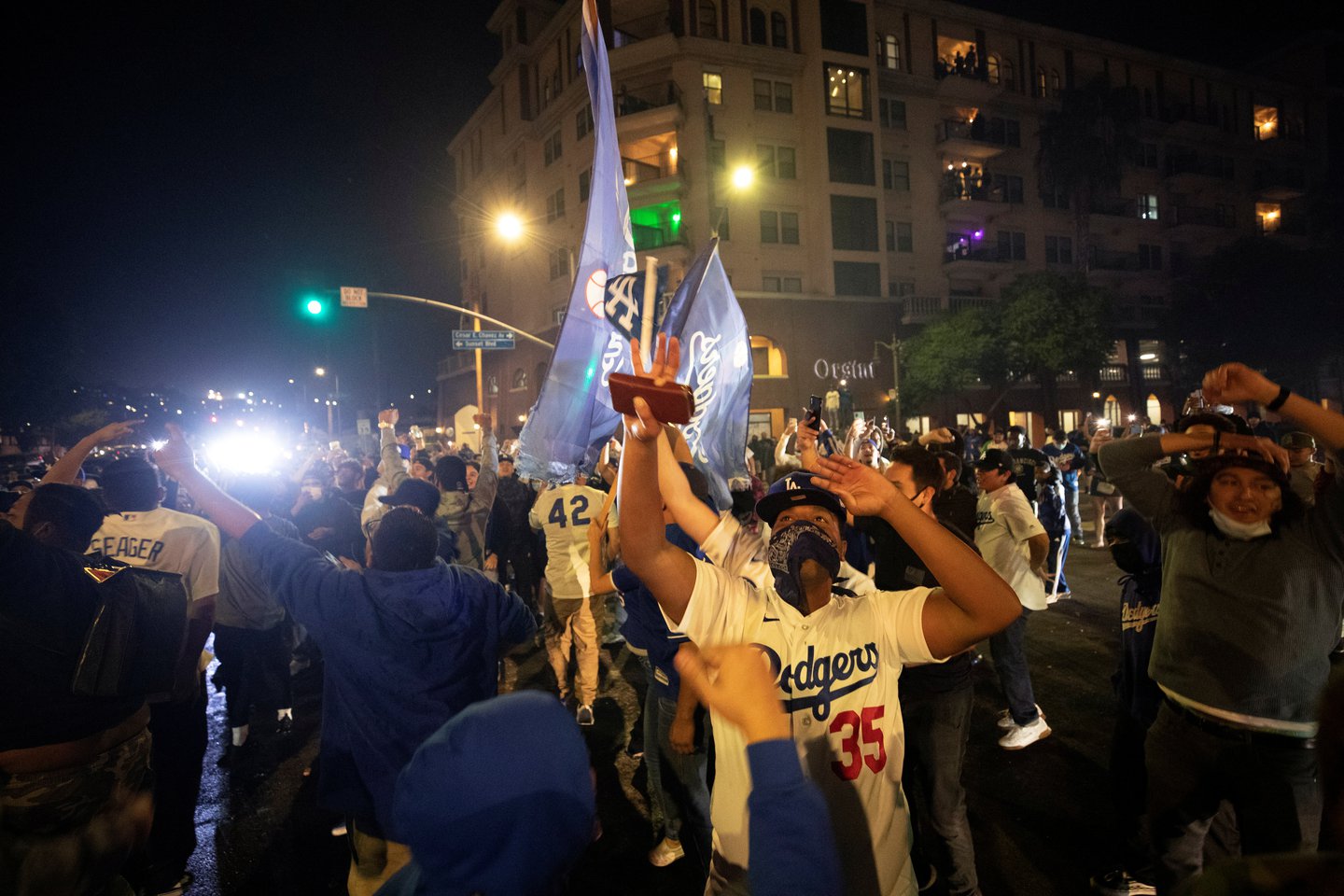 Two journalists were hit with crowd-control munitions fired by law enforcement while documenting celebrations in Los Angeles, California, after the Dodgers won the World Series on Oct. 27, 2020.

Los Angeles and cities across the U.S. experienced protests against police brutality throughout the summer, and crowds in L.A. had clashed with police earlier in October during celebrations of the Lakers’ NBA championship win. The U.S. Press Freedom Tracker is documenting assaults, arrests and other incidents involving journalists covering protests across the country.

The Los Angeles Times reported that celebrations devolved into looting and vandalism in downtown L.A. and the neighborhood of Echo Park.

Holshouser reported on Twitter that one policeman told her there were “not enough” officers to deal with the crowd.

Braslow told the Tracker, “Police were trying to respond to things, but again, they were spread thin.”

On her Twitter feed, Holshouser said that the LAPD issued a dispersal order shortly after 10 p.m., and that a line of officers in riot gear and mounted police were preparing to advance.

Braslow said he and Holshouser were standing with a group of 10-15 people at a street corner when police began advancing toward them. Shortly before midnight, Holshouser posted a clip of nearly a dozen individuals wearing Dodgers-branded apparel posing for Braslow to take a photo.

“These guys made @SamBraslow photograph them and then we got shot at with foam baton rounds,” Holshouser wrote. “I got shot in my hip. I’m fine just mega pissed.”

Braslow tweeted an image of a canister for a foam baton round — a crowd-control munition similar to a rubber bullet — at 11:54 p.m., and wrote that he had been hit in the arm by a “less-lethal” round. He told the Tracker he was not certain what type of munition struck him.

Whelp, hit by a less lethal in the arm. I’m fine, just noting it. As per usual, camera around my neck, carrying camera bag, and wearing press credentials. pic.twitter.com/sy81UGBe7x

Braslow told the Tracker he was also wearing a bulletproof vest and ballistic goggles. Holshouser can be seen in clips from that night wearing a bright yellow vest and press pass.

Braslow said he had some bruising and soreness on his arm, but both he and Holshouser were able to continue reporting that night.

The Los Angeles Police Department did not respond to emailed requests for comment as of press time.

A third journalist, L.A. Taco reporter Lexis-Olivier Ray, was tackled to the ground and struck with batons while filming the celebrations shortly after midnight. The U.S. Press Freedom Tracker has documented that assault here.

Jintak Han, a photographer and reporter for the Daily Bruin, UCLA’s student newspaper, was shot at by law enforcement while covering protests in Los Angeles, California, on May 30, 2020.The protests were held in response to a video showing a white police officer kneeling on the neck of George Floyd, a Black man, during an arrest in Minneapolis, Minnesota, on May 25. Floyd was pronounced dead at a local hospital. Protests against police brutality and in support of the Black …

Estelle Timar-Wilcox, news editor for the Macalester College student news site The Mac Weekly, was shoved by a Minnesota State Patrol trooper while covering a protest in Brooklyn Center, Minnesota, on April 16, 2021, she told the U.S. Press Freedom Tracker.The fatal police shooting of 20-year-old Daunte Wright in Brooklyn Center on April 11 rekindled a wave of racial justice protests that began almost a year earlier. Wright’s death occurred as a former police officer in nearby Minneapolis was on …

Kori Suzuki, media editor for The Mac Weekly, the student news site of Macalester College in St. Paul, Minnesota, was hit with a crowd-control munition while covering a protest in Brooklyn Center on April 14, 2021, he told the U.S. Press Freedom Tracker.The fatal police shooting of 20-year-old Daunte Wright in Brooklyn Center on April 11 rekindled a wave of racial justice protests that began almost a year earlier. Wright’s death occurred as a former police officer in nearby Minneapolis …
More related incidents