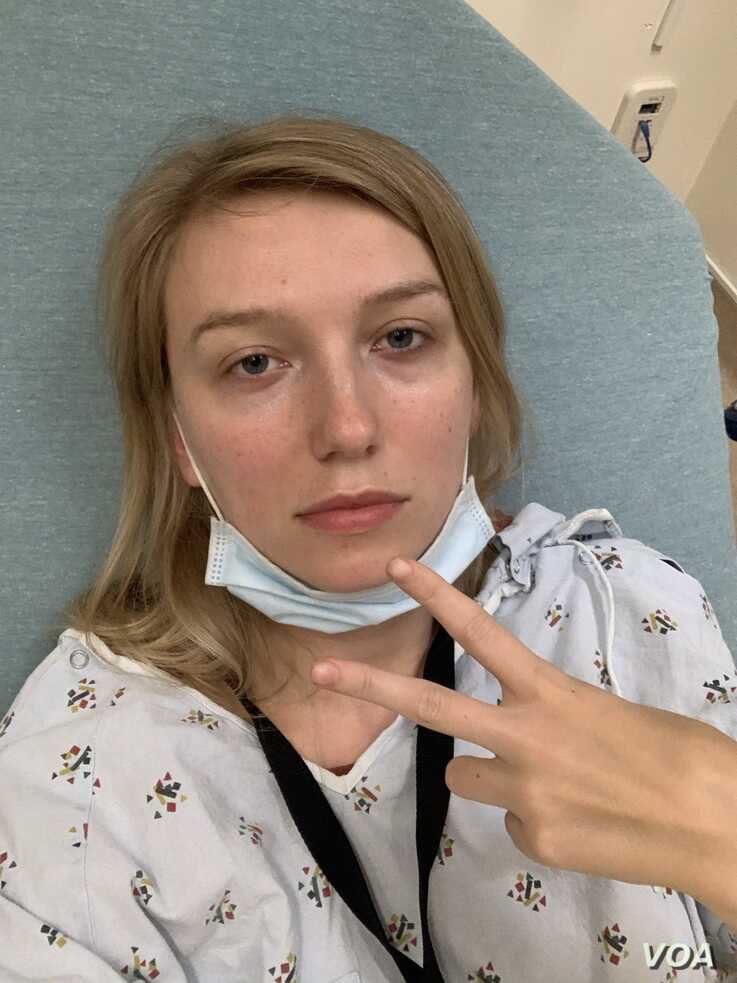 Khrystyna Shevchenko, a Voice of America video journalist, was injured by an unknown assailant while covering protests in Santa Monica, California, on May 31, 2020.

Voice of America video journalist Khrystyna Shevchenko was punched in the face and fractured three toes while covering protests against police violence in Santa Monica, California, on May 31, 2020.

Shevchenko told the U.S. Press Freedom Tracker in an interview that she and a friend, Christian Gomez, had been filming along the Third Street Promenade in downtown Santa Monica that afternoon when individuals split away from the protesters and broke into various stores, taking shoes and other items.

As Shevchenko was setting up her frame, an unidentified man charged toward her and punched her in the face, she said. She immediately blacked out, and her camera and tripod fell on her foot, fracturing three toes and breaking the camera’s viewfinder. Gomez told the Tracker that the assailant then punched him in the face as well.

“My friend fought back,” Shevchenko said. “But then that guy started to call for help, so [other individuals] started to kick my friend without any analysis of what was going on.”

Gomez told the Tracker that he had pinned the assailant down, but then released him to check on Shevchenko, who had regained consciousness. The assailant ran away with Gomez’s gimbal and lens. Gomez then helped Shevchenko to his car and drove her to the UCLA Santa Monica Medical Center emergency room, where a doctor diagnosed the three fractured toes and a minor head injury, Shevchenko said. Shevchenko underwent surgery on her foot two weeks after the incident.

Shevchenko said she couldn’t be certain if she was targeted specifically because she was a journalist, though she surmised that the assailant attacked her in order to take her camera and other equipment.

After returning home from the ER, Shevchenko filed her story for Voice of America’s Ukrainian service.

“I was so shocked—I couldn’t think that I would go through all of that and not have the story air,” Shevchenko said of her need to get the story out despite the pain she was in. “I had to write the story.”

In early June, Shevchenko and Gomez filed a report with the Santa Monica Police Department.

“He [the unidentified man] is in my footage and my friend recognized him,” Shevchenko explained. “However, the police said that because I didn’t document the action of punching, they cannot confirm that he did it.”

Additionally, Shevchenko made clear that Gomez was a witness to the incident, but the police department never reached out to him after taking his initial statement, according to Gomez. Shevchenko’s case is pending, but as of early October, she said she has yet to receive new updates.

The Santa Monica Police Department did not respond to multiple requests for comment as of press time.

“It’s an injustice,” Gomez stated. “She went through neuropathy for a month, and it seems like there’s no recourse to alleviate financial hardships or provide any help at all. It’s not just a physical thing that she had to overcome. It’s emotional, mental.”

Shevchenko told the Tracker that she still experiences post-traumatic stress and is unable to walk independently.

Numerous protests across the Los Angeles area ensued following the death of George Floyd, a Black man who died in Minneapolis, Minnesota, on May 25. In a widely circulated video online, a white police officer kneeled on Floyd’s neck, ignoring his calls that he could not breathe. Floyd was pronounced dead at a local hospital.

Photojournalist Jason Ryan said he was hit in the head with what he believes was a rubber bullet while covering a protest in Santa Monica, California, on May 31, 2020.The protest was part of a wave of demonstrations against police violence across the country sparked by the release of a video showing a white Minneapolis police officer kneeling on the neck of George Floyd, a Black man, during an arrest. Floyd was later pronounced dead in a hospital. The officer …

Paula Rosado, a reporter for Primer Impacto, a Spanish-language evening news program broadcast by Univision, was hit with a rubber bullet as she covered protests in Santa Monica, California, on May 31, 2020.Demonstrations that day were held in response to a video showing a white police officer kneeling on the neck of George Floyd, a Black man, during an arrest in Minneapolis, Minnesota, on May 25. Floyd was later pronounced dead at a local hospital. Protests against police brutality and …