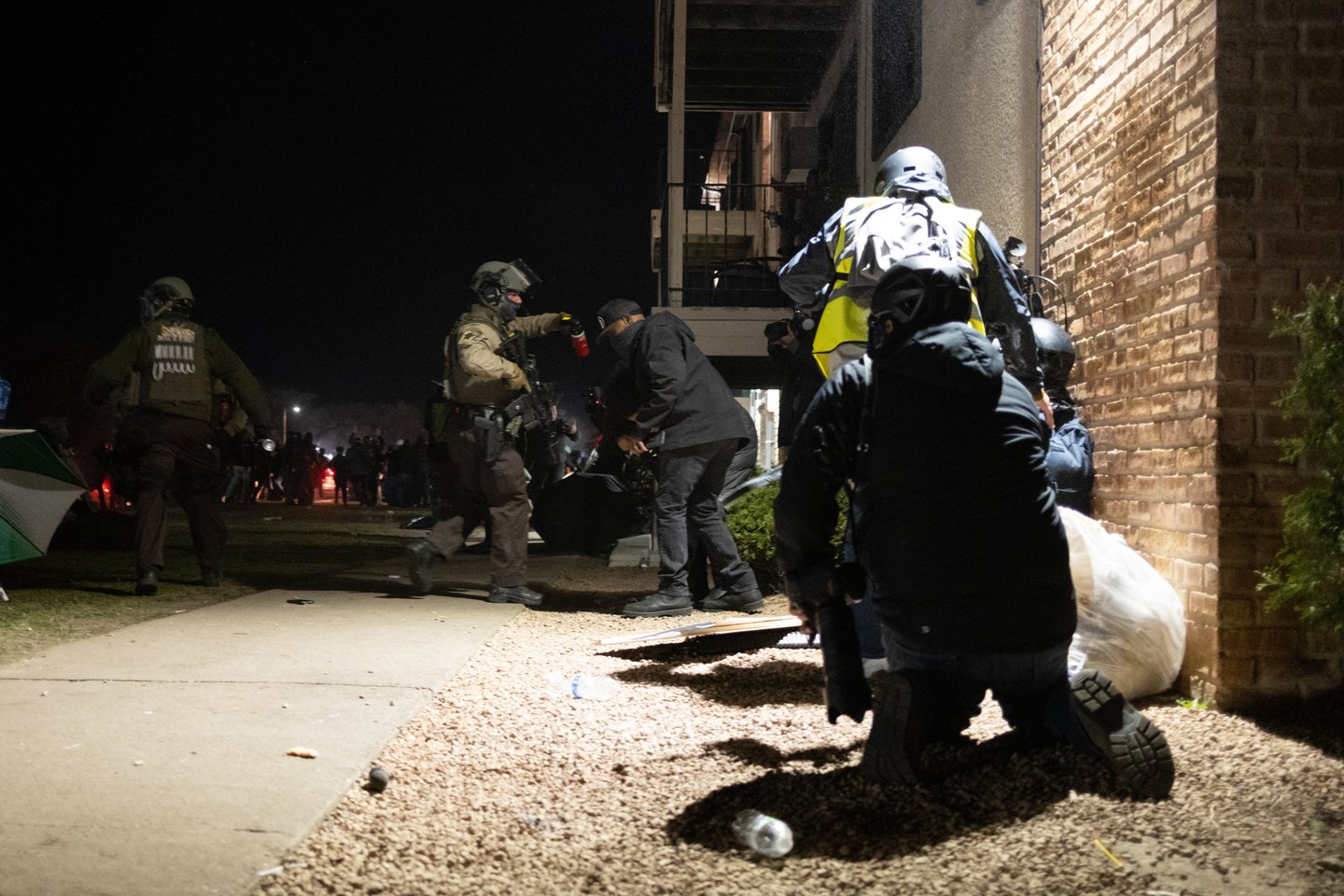 After being pepper-sprayed himself, photographer Tim Evans captured the Agence France-Presse crew recovering from being hit with the same chemical irritant. A Hennepin County Sheriff’s Office spokesperson said the incident was under investigation.

Agence France-Presse photojournalist Chandan Khanna said he was pepper-sprayed by a law enforcement officer while covering a protest in Brooklyn Center, Minnesota on April 16, 2021.

According to the St. Paul Pioneer Press, the protest had been peaceful until around 9 p.m. Some time after that, authorities told the outlet, some in the crowd began to throw objects and attempted to break through a barrier around the police station, prompting the declaration of an unlawful assembly and orders for dispersal. At around 10 p.m., Minnesota Public Radio reported that police moved swiftly to corral the protesters and members of the press, deploying flash-bang grenades and pepper spray.

Khanna told the U.S. Press Freedom Tracker that he was near a fence around the Brooklyn Center Police Department, taking photographs as law enforcement advanced on protesters. He saw another group of officers open a gate in the fence and a large number of officers came rushing out at the crowd, he said.

Khanna said he rejoined his AFP colleagues, Eléonore Sens and Robin Legrand, and they moved to a well-lit spot in an effort to make clear to law enforcement that they weren’t protesters.

Officers rushed toward them, and Khanna and Sens told the Tracker they shouted to identify themselves as press. Khanna said he continued taking photographs, and he held up his press pass, issued by AFP.

Khanna said one officer sprayed a nearby photographer, Tim Evans, then turned to the AFP journalists and began spraying each of the three of them with the chemical irritant. They continued to shout to identify themselves as journalists, Khanna said.

A photograph, taken and posted on Twitter by photojournalist Alex Kent, shows the officer spraying the three AFP journalists, one of whom was wearing a bright yellow vest marked “PRESS.”

Khanna said a mask he was wearing gave him some protection from the spray, but he said the irritant got into his left ear, was extremely painful and caused him difficulty with hearing. He said the sensation lasted for about three days. The chemical also caused a burning feeling on his wrist that lasted for days, he said.

Sens told the Tracker that when the officer stopped spraying, he shouted at them to “get the fuck out.” She said the journalists tried to stay to continue to document the scene, but officers were yelling at them to leave.

The officer who sprayed them directed them to leave the area, Khanna said. As they went, another officer arrived, grabbed him by the right arm and dragged him, he said, leading the three AFP journalists away from the perimeter of the area where law enforcement were arresting protesters.

As the officer moved them away, Khanna said he saw a number of journalists who had been detained and were lying on the ground. He tried to take photographs using his long camera lens, but he said officers formed a human shield around him to block his view.

Khanna said the officer who had grabbed his arm told him multiple times, “if you point your camera anywhere I'm going to arrest you.”

The AFP journalists were taken to a nearby checkpoint where law enforcement officers were photographing journalists’ faces and IDs.

Khanna, who is an Indian citizen, said the officer at the checkpoint asked to see his passport, which Khanna didn’t have with him. Eventually, Khanna said, he used his phone to pull up a photograph of his passport from an online folder. Then, he said, the officer asked him to show his visa. The officer photographed both documents.

Khanna said he does not know what law enforcement planned to do with the information and remains concerned about what will happen with the photographs of the documents.

Khanna said that the three AFP journalists should have been clearly identifiable as press to the officer who pepper-sprayed them.

“If they say like, you know, ‘we don't know that this was press,’ this is totally false, because they literally know that I'm press and they are telling me not to point camera,” he said.

“It looked very clear that their intention was not to spare anybody,” he said.

Agence France-Press journalist Robin Legrand and two colleagues were pepper-sprayed by law enforcement while reporting on a protest in Brooklyn Center, Minnesota on April 16, 2021.Several hundred protesters marched to the Brooklyn Center Police Department in response to the fatal shooting of 20-year-old Daunte Wright, a Black man, by a white police officer during a traffic stop. Wright’s death, on April 11, occurred as a former police officer in nearby Minneapolis was on trial in the death of George Floyd, …

Agence France-Presse video correspondent Eléonore Sens and two colleagues were pepper-sprayed by law enforcement while reporting on a protest in Brooklyn Center, Minnesota, on April 16, 2021.AFP photojournalist Chandan Khanna and reporter Robin Legrand were sprayed at the same time.Several hundred protesters marched to the Brooklyn Center Police Department in response to the fatal shooting of 20-year-old Daunte Wright, a Black man, by a white police officer during a traffic stop. Wright’s death, on April 11, occurred as a former …