Agence France-Press journalist Robin Legrand and two colleagues were pepper-sprayed by law enforcement while reporting on a protest in Brooklyn Center, Minnesota on April 16, 2021.

According to the St. Paul Pioneer Press, the protest had been peaceful until around 9 p.m. Some time after that, authorities told the outlet, some in the crowd began to throw objects and attempt to break through a barrier around the police station, prompting the declaration of an unlawful assembly and orders for dispersal. At around 10 p.m., Minnesota Public Radio reported that police moved swiftly to corral the protesters and members of the press, deploying flash-bang grenades and pepper spray.

One of Legrand’s colleagues, Eléonore Sens, told the U.S. Press Freedom Tracker that she, Legrand and photojournalist Chandan Khanna were blocked in a corner of the street when lines of law enforcement officers rushed in to form a perimeter around the crowd of protesters.

Legrand told the Tracker in an email that he and his colleagues shouted to identify themselves as journalists, but an officer sprayed them.

“We shouted "PRESS, PRESS, PRESS", but to no avail; the spraying came before and after that,” he said.

Legrand said he believed they were sprayed “in spite” of the fact that they were journalists.

“We were far from any protester, and had clear markings that we were members of the press but the spraying was indiscriminate I'd say,” he said.

A photograph taken and posted on Twitter by photojournalist Alex Kent, shows the officer spraying the three AFP journalists, one of whom was wearing a bright yellow vest marked “PRESS.”

Once the officer stopped spraying, Sens said, he shouted at them to “get the fuck out.”

Legrand told the Tracker the AFP journalists were also ordered to "get on the fucking ground," but he said that they didn’t comply. Legrand said officers yelled at them when they tried to stay to document law enforcement arresting protesters.

After the AFP journalists left the first perimeter of officers, Sens said they came upon another line of officers who took photographs of journalists’ faces and press credentials.

Legrand said he was “pretty shocked” by the process. He said he asked law enforcement for contact information for a press liaison, but they ignored his request.

Legrand said he was wearing a bright yellow vest that said “PRESS” in capital letters on the front. He noted that Sens was also carrying a professional video camera.

Legrand said he turned away when the officer sprayed them and was hit with a minimal amount of the chemical. He said that he had a mild burning feeling on his hands for a few hours, despite attempts to scrub the substance off. He occasionally experienced a burning feeling when putting on or taking out his contact lenses for several days, he said.

Minnesota Department of Corrections Commissioner Paul Schnell, who worked with the governor’s office to respond to the concerns about treatment of the media in Brooklyn Center, told the Tracker that it had been determined that the officer who sprayed the AFP journalists was a member of the Hennepin County Sheriff’s Office. A spokesperson for Hennepin County Sheriff’s Office declined to comment because the incident was under investigation. 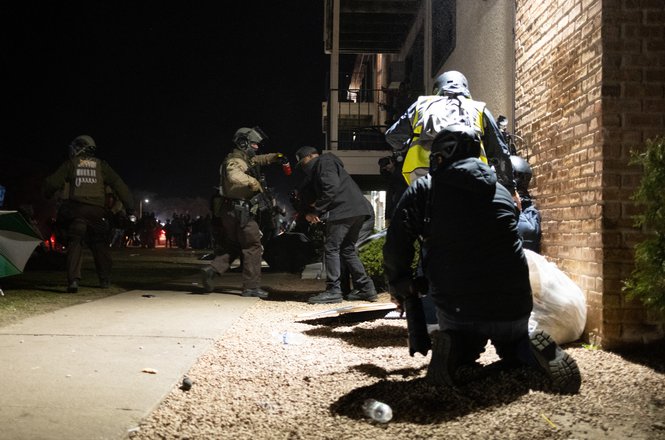 Agence France-Presse video correspondent Eléonore Sens and two colleagues were pepper-sprayed by law enforcement while reporting on a protest in Brooklyn Center, Minnesota, on April 16, 2021.AFP photojournalist Chandan Khanna and reporter Robin Legrand were sprayed at the same time.Several hundred protesters marched to the Brooklyn Center Police Department in response to the fatal shooting of 20-year-old Daunte Wright, a Black man, by a white police officer during a traffic stop. Wright’s death, on April 11, occurred as a former …