On the evening of June 2, 2020, Detroit police assaulted Steve Neavling, a journalist with the Detroit Metro Times who was covering protests against police violence, Neavling told the Committee to Protect Journalists in a phone interview.

Neavling told CPJ that he and other reporters were watching a group of about 150 peaceful protesters along Gratiot Avenue on Detroit's east side when police surrounded the protesters and moved in on them. The journalist said that he was filming the scene when a police officer grabbed him and threw him to the ground.

Just got attacked, punched, kneed and elbowed by police, who threw my phone and broke my glasses. More worried about the protesters. Mass arrests. Out of control in Detroit. That was police brutality. pic.twitter.com/o4dSZ8uMVN

“I yelled ‘I’m with the media!’ and [the officer] immediately threw me down, swatted my phone out of my hand and, intentionally or not, ripped the glasses off of my face and they were broken,” Neavling said. “My camera lens was broken during the fall and every time I [said] ‘media,’ I got kicked, punched and elbowed by the same officer,” Neavling told CPJ, adding that his accreditation was visible.

“I started walking away without my glasses. I couldn’t see and [the assaulting police officer] kept yelling ‘Get the fuck out of here,’” Neavling said.

The journalist, who said he is unable to see clearly further than two feet without his glasses, heard someone say that the police chief was nearby. Neavling said he approached the chief, told him what happened and was told by the chief to speak with the police internal affairs unit.

Neavling said he called the communications point person for Detroit police, who put him in touch with the internal affairs department. An officer in internal affairs was dismissive of Neavling’s complaints and said police had thousands of cases to work through, the journalist told CPJ. Neavling told CPJ in an email on October 13 that he filed a complaint the night of the assault, but four months later had not heard back.

Sgt. Nicole Kirkwood from the Detroit Police Deparment’s media relations team did not respond to CPJ’s request for comment.

Neavling said that due to COVID-related restrictions he had to wait a week before he could get a new pair of glasses, during which time he was unable to work because he could not see well without his glasses. He also said that he sustained bruises and small scrapes on his right elbow and right shoulder.

The protests in Detroit that day were held in response to a video showing a white police officer kneeling on the neck of George Floyd, a Black man, during a May 25 arrest in Minneapolis, Minnesota. Floyd was pronounced dead at a local hospital. Protests against police brutality and in support of the Black Lives Matter movement have been held across the United States since the end of May.

Freelance photographer Sean Work was assaulted by police officers while covering protests against police violence in Detroit, Michigan, on June 2, 2020.Work told the U.S. Press Freedom Tracker in an email that he had been following protesters as they marched through downtown that evening. At 8:47 p.m., after a curfew went into effect, Work said he’d been taking photos of police arresting protesters, with his two media passes prominently displayed — one hanging on a lanyard around his neck and … 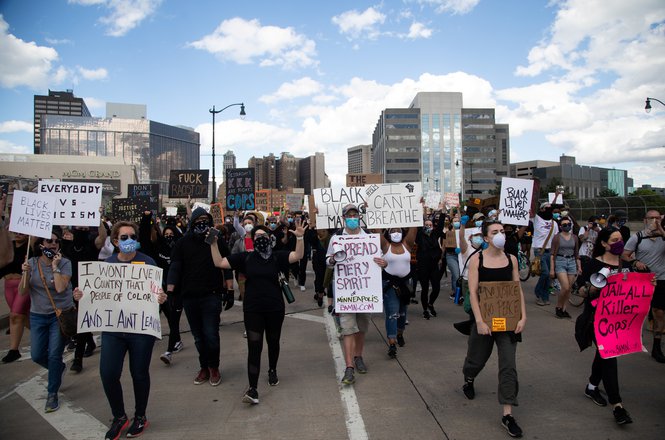 Freelance photojournalist Matthew Hatcher was on assignment for Getty Images covering demonstrations in Detroit, Michigan, when he was struck alongside …

On May 31, 2020, while covering protests in Detroit, Michigan, Detroit Free Press reporter Mark Kurlyandchik was charged by a police officer, who knocked his phone out of his hands as he was filming, and told by another to leave the area where press were permitted, according to Kurlyandchik’s tweets from that day.Neither Kurlyandchik, the Free Press, nor the Detroit Police Department responded to the U.S. Press Freedom’s request for comment as of press time.According to Kurlyandchik’s Twitter feed, the …
More related incidents