Independent journalist James Stout said he was pepper sprayed and pushed with a club by police while he was covering a protest in San Diego, California on Aug. 28, 2020.

Demonstrators gathered in San Diego in the days after Jacob Blake, a Black man, was shot by police in Kenosha, Wisconsin on Aug. 23, the San Diego Union-Tribune reported. Protests against racism and police brutality had been held across the country for months, sparked by the May 25 killing of George Floyd in Minneapolis, and other deaths of Black people at the hands of police.

Stout, an independent journalist whose work has been published in Slate, The Appeal and other outlets, told the U.S. Press Freedom Tracker he was taking pictures of police arresting a woman who was driving a car that provides support for demonstrators.

More protesters and police soon arrived at the scene, and Stout continued to take photographs. Stout said he was standing near a line of police officers who were blocking the intersection, looking through his camera viewfinder when he suddenly felt pepper spray on his face. He said he doesn’t know if he was targeted.

Stout said he lowered his camera to try to see who had sprayed him when a police officer was suddenly in his face shouting at him.

“He starts shoving me and I'm like, no, no I'm a journalist,” Stout said.

The officer pushed him back with his hands and with a baton, he said. At the time, Stout said he was under the impression that the officer may have been trying to get his camera, so he held it up above his head.

“I got really mad after he eventually backed off,” Stout said. “I was like, What are you doing, why are you doing this? You're not supposed to attack journalists.”

Stout said he verbally identified himself as a journalist several times. He was wearing a black vest with the word PRESS written in white, and he carried credentials issued by the Industrial Workers of the World Freelance Journalists Union, he said. He said he didn’t have any bruises or injuries from the incident because he was wearing a bulletproof vest.

According to an article Stout wrote for Slate, the journalist approached the captain of patrol operations for the San Diego Police Department, who was there at the time, to ask why they were targeting journalists. The official turned his back and walked away, Stout wrote. Stout told the Tracker that the San Diego Police Department has denied his requests for body camera footage of the incident. 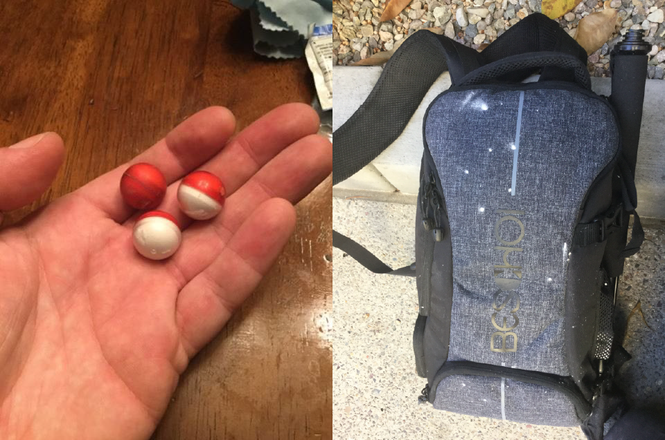 Journalist JoseLuis Baylon was hit by tear gas and projectiles while covering a San Diego protest on May 31, 2020. …