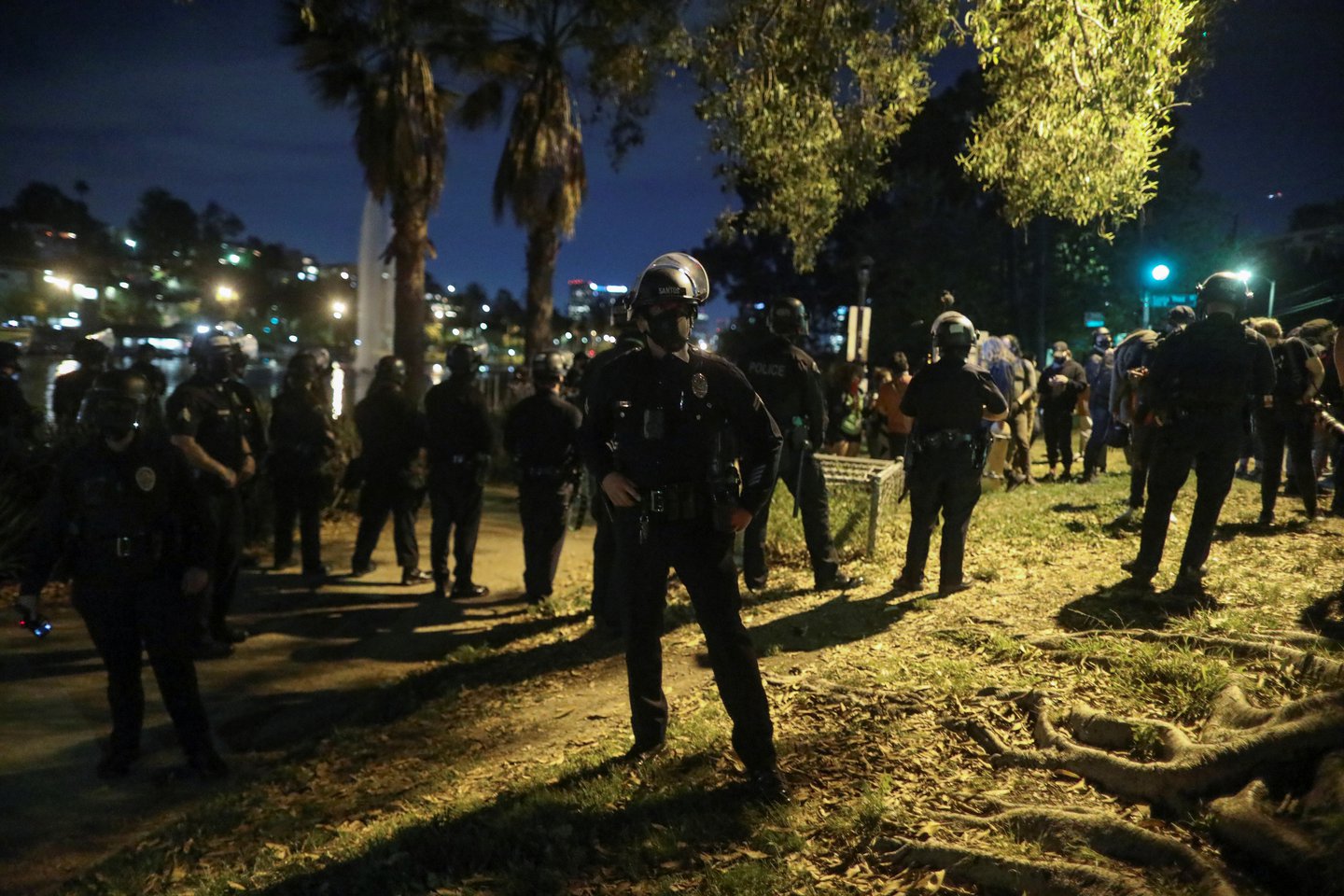 Los Angeles police arrive on March 24, 2021, to begin the eviction of homeless encampments at Echo Park Lake in Los Angeles. At least 17 journalists were arrested or detained the following day while covering protests against the evictions.

At least 17 journalists were arrested or detained in Los Angeles, California, while documenting demonstrations near Echo Park Lake on March 25, 2021, as reported to the U.S. Press Freedom Tracker, on social media and in other news outlets.

According to the Post, before anyone could exit, a supervising officer announced that everyone was under arrest, and officers surrounded the group using a police tactic called “kettling.”

Independent photojournalist Ashley Balderrama said she was caught in the police kettle while she was live on her Instagram and taking photographs. “I was hit on the back with an officer’s baton,” she told the Tracker in an email. She said she was repeatedly shoved by an officer and asked to leave the area, but “there was literally no where to go” because she was stuck between the officers and the protesters. She said she had her National Press Photographers Association credentials, but the officer kept shoving her until some protesters pulled her away.

“We were first told that we were no longer free to leave and that we would be arrested. After explaining to some officers that we were press, they initially said, ‘It’s too late,’” Balderrama said. “At one point as they went to arrest a protester right next to me, they tackled him and he fell into me, [and] when I looked up, an LAPD officer was pointing a less than lethal weapon directly at my face at point blank range.”

Balderrama tweeted a video of this arrest, in which she can be heard yelling, “We can’t go anywhere. There’s another line of you guys right there.”

Balderrama said that even though her credentials were around her neck, she was told multiple times that she would be arrested. “They then moved us all and made press mix with protesters, which worried me greatly, that they would not even take the time to check my credentials.”

She told the Tracker that after being detained for two hours, she was allowed to leave. “As we walked out, they told us where the press viewing was, which was on the next block over, with absolutely no visibility of [the] incident,” she added.

At around 1 a.m. on March 26, the LAPD posted another statement, specifically addressing the detainments of members of the press.

“An unlawful assembly was declared by the Incident Commander after the unlawful activity of individuals threatened the safety of the officers and all those present,” the statement said. According to the statement, police declared the gathering unlawful in part because protesters were shining strobe lights at police, which could “cause significant injury to the eyes.”

The statement said members of the press were directed to identify themselves and relocate to a media area about 350 feet away from the crowd.

The LAPD statement noted that as individuals were being detained inside the kettle, police officers “learned that several credentialed and non-credentialed members of the media were part of the group. Members from the Department’s Media Relations Division were summoned to assist in identifying these individuals and they were released at scene without being arrested.”

The Los Angeles Police Department, which accepts requests for comment only via email, did not respond to the Tracker’s request for further comment.