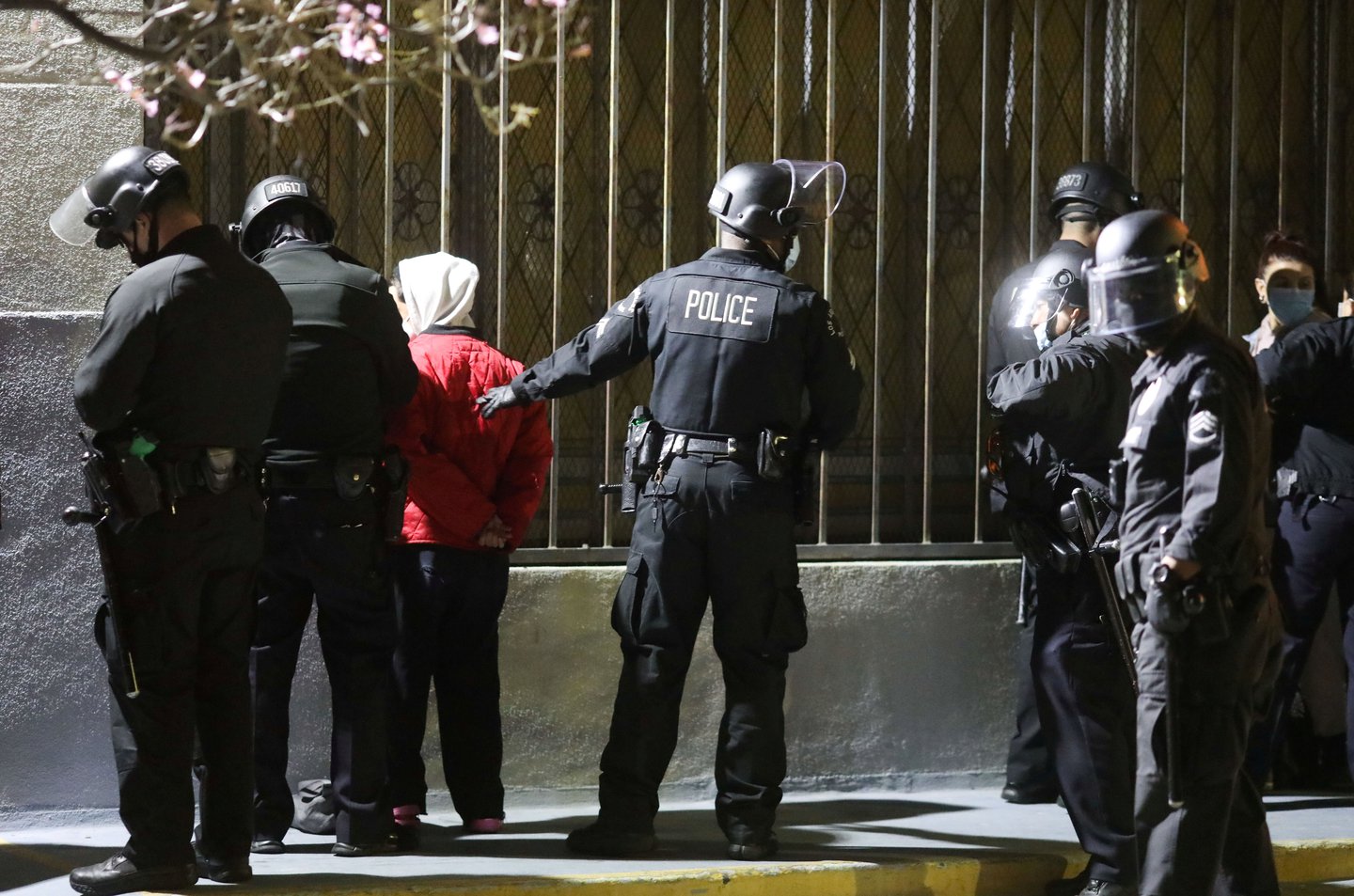 Los Angeles Police Department officers detain protesters demonstrating against the closure of a homeless encampment at Echo Park Lake on March 25, 2021. More than a dozen journalists were also arrested or detained.

Los Angeles Times reporter James Queally tweeted that he and reporter Lexis-Olivier Ray, who writes for the digital news site L.A. Taco, were standing next to each other inside the “kettle” as police faced off with protesters. Queally noted that just a week earlier, he had written a story for the Times about the “failure to disperse” charges brought against Ray by the LAPD months after he was covering another incident in downtown L.A.

Ray tweeted that he and Queally were trying to stick together after the crowd was boxed in, and he posted footage he took as Queally was led away by officers and placed in zip-tie cuffs.

Ray confirmed to the U.S. Press Freedom Tracker that he continued filming as officers arrested more individuals in the kettle — sometimes violently. In the footage, Ray can be heard saying, “Why are you pointing this [weapon] at me? I’m with the media,” as an officer trains his weapon on Ray’s chest and face.

LAPD violently arresting a protestor earlier near Lemoyne and Park Ave. Dozens of protestors and media have been boxed in. Nobody is able to leave. @LATACO pic.twitter.com/3hh6kOLERi

Queally tweeted that after his arrest and release 30 minutes later, Ray called him and said that he was still detained in the kettle.

“I managed to get hold of an officer in media relations who rushed to do something about it,” Queally wrote. “I’m still worried he might have gotten arrested otherwise.”

Ray tweeted at around 10:30 p.m. that he had been released, along with other members of the press, without being formally arrested.

LAPD has let me and a group of press go without detaining us. They made us all show our press passes to avoid arrest. I'm safe 🙏🏾 @LATACO pic.twitter.com/z1nuIuyUxI

“They held us there for more than an hour and then let people go if they had a press pass,” Ray told the Tracker. “Last year they said press could self-ID but I think they only let people go [that night] if they approved their press pass.”

The statement says members of the press were directed to identify themselves and relocate to a media area 350 feet away from the crowd.

About the media area, Queally tweeted, “Media pens are deliberately setup to keep reporters AWAY from news. Tonight was no different. It was nowhere near the protests or action in the park.”