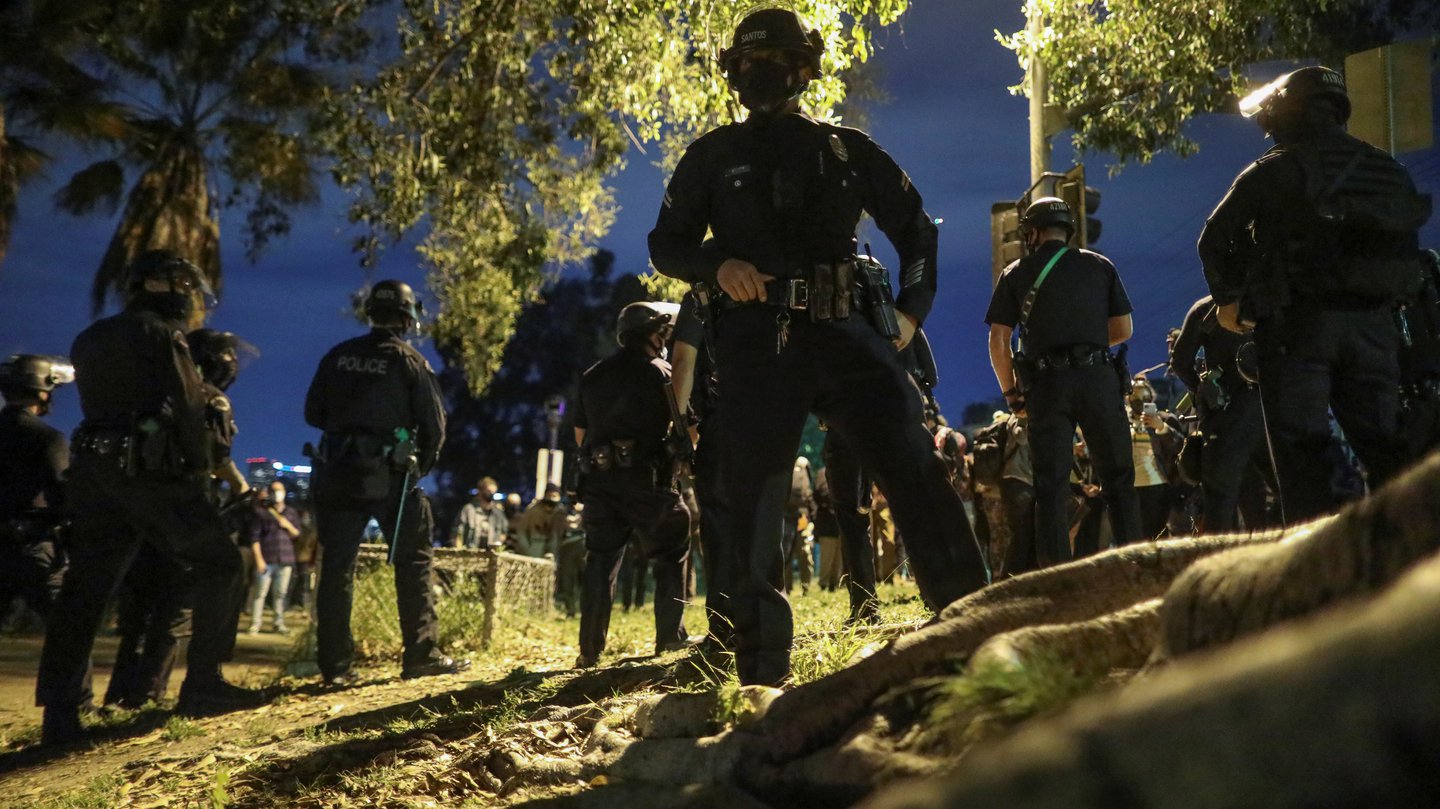 Los Angeles Police Department officers arrive at Echo Park Lake to evict homeless encampments. Protests against the eviction on March 25, 2021 resulted in several assaults of journalists and at least 13 arrested or detained while reporting.

Kate Gallagher, who was reporting on the protest for the nonprofit community journalism outlet Knock LA, told the U.S. Press Freedom Tracker she was covering the protest with her colleague Jonathan Peltz.

She said police made an announcement directing journalists and legal observers to disperse around 8 p.m., but she said the announcement was difficult to hear and she only learned about it on Twitter.

Gallagher said she was concerned about what police planned next for the protesters, so she decided to stay and continue reporting. Meanwhile, police had set up a pen for media several blocks away, but a number of other journalists also decided to stay at the scene of the protest, according to Peltz, the other Knock LA reporter.

About 20 minutes later, Gallagher said, police started to form a kettle to detain the group. Gallagher and Peltz were standing with about a dozen other journalists at the time, she said.

“No one really seemed very alarmed at first,” she said. According to Gallagher, journalists did not expect that police would arrest them because they were there covering the scene, not as part of the protest.

She said that it became clear that journalists were also going to be arrested when one member of the press tried to leave the police kettle and was not allowed to go.

A tweet from the Knock LA Twitter account posted at 9:45 p.m. said that Peltz and Gallagher were arrested by the LAPD while they were covering the protest.

Two of our reporters have been arrested at #EchoParkRiseUp pic.twitter.com/T1zeBPm7Dw

The publication called for police to release the journalists immediately and demanded that any charges be dropped.

“Law enforcement cannot be allowed to jail journalists for doing their job,” the statement reads.

Gallagher said that she identified herself as a journalist several times during her interactions with the police, including when police were forming the kettle, again when she was patted down during her arrest, and as she was loaded onto a bus to be transported to the LAPD Metropolitan Detention Center.

Gallagher and Peltz were released from the detention center at around 12:30 a.m. March 26, she said, and she was ordered to appear in court on July 30 on a charge of failure to disperse.

UPDATE: Jonathan Peltz and Kate Gallagher are free. Thank you to everyone who advocated for their release. pic.twitter.com/wB0eiqiKcF

Knock LA reporter Kate Gallagher was one of at least 19 journalists detained by police using a technique known as “kettling” while documenting protests near Echo Park Lake on March 25, 2021. After police surrounded the crowd and announced everyone was under arrest, they began restraining people one by one and leading them out of the kettle.

Gallagher told the Tracker she identified herself as a journalist to police multiple times both before and while she was under arrest. She was transported to the LAPD Metropolitan Detention Center alongside fellow Know LA reporter Jonathan Peltz, where they were processed and charged with failure to disperse.

On April 7, Rob Wilcox, a spokesman for City Attorney Mike Feuer, told the Committee to Protect Journalists — a founding partner of the U.S. Press Freedom Tracker — that the office had not received cases concerning Gallagher or the seven other journalists who received citations on March 25.

Similarly, when reached for comment over the phone, a Los Angeles Police Department spokesperson told the Tracker that department policy is not to discuss arrests once paperwork has been filed. The spokesperson did not respond to requests to confirm details about this arrest, including if any paperwork had been filed.

Peltz told the Tracker via Twitter message on April 27 that he had received no notice that the charges were dropped and believes that his and Gallagher’s hearing dates on July 30 still stand.

Despite the lack of communication to the journalists involved, and barring further information, the Tracker is listing the charges against Gallagher as “dropped” based on the lack of paperwork filed.