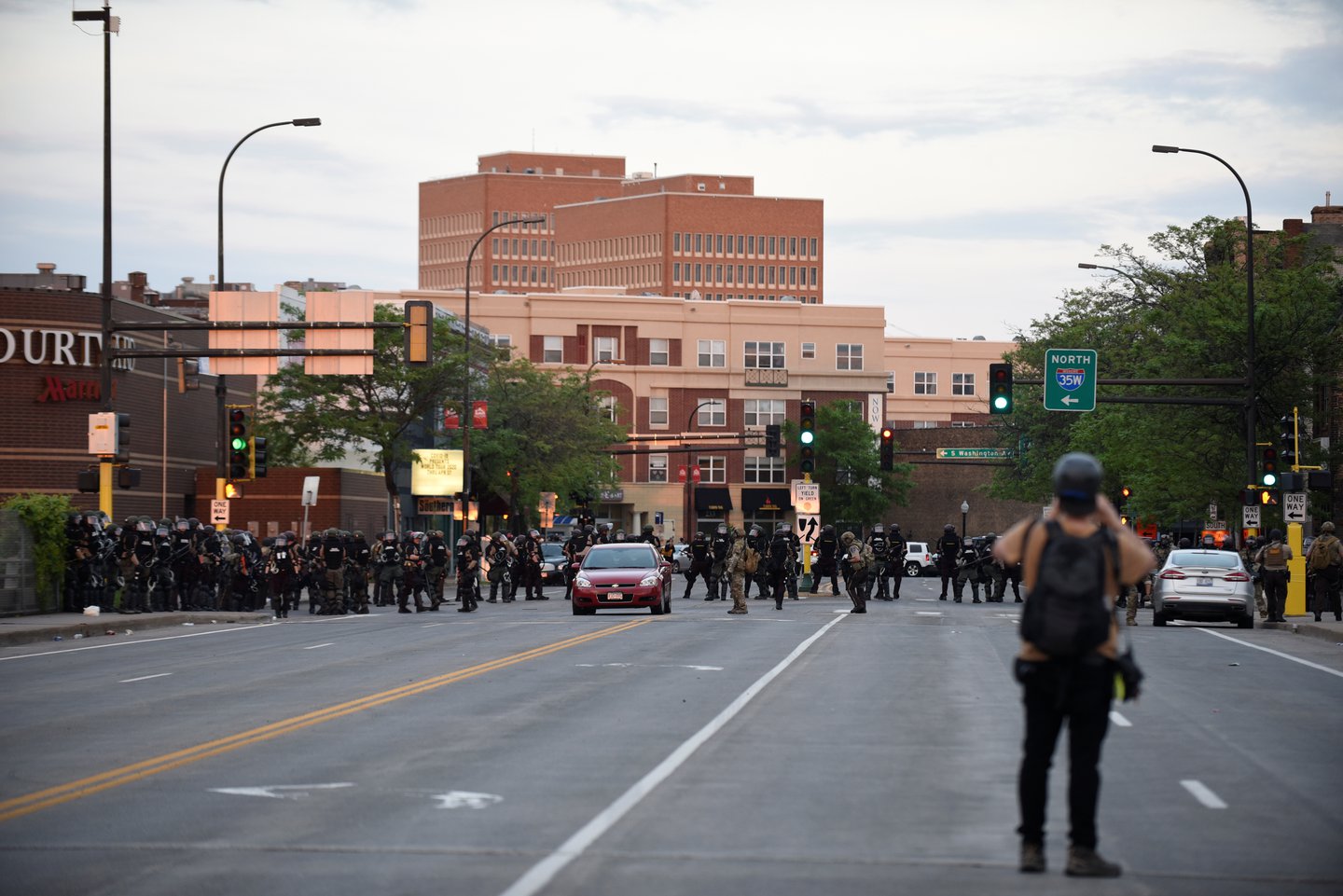 Minneapolis police slash a car’s tires on Washington Avenue by the I-35W highway on-ramp during demonstrations on May 31, 2020.

Law-enforcement officers punctured the tires of news crews and journalists as they reported on multiple days of protests in Minneapolis, according to news reports and an interview with the U.S. Press Freedom Tracker.

According to Mother Jones, officers punctured the tires of all vehicles in a Kmart parking lot on May 30 and again on a highway overpass on May 31 after those areas briefly turned into police staging grounds.

At least three journalists and one news team — Andrew Kimmel of AuraNexus; freelance photojournalist Philip Montgomery; Lucas Jackson, a staff photographer for Reuters at the time; and a Radio-Canada news crew that included reporter Philippe Leblanc — reported returning to their respective vehicles after covering protests near the Fifth Precinct to find the tires slashed. Kimmel reported that four CNN vehicles also had their tires slashed.

This tow truck driver has been here all day. He later told me four @CNN vehicles had their tires slashed here as well. There was an entire row of press vehicles that all had to be towed. pic.twitter.com/LG40yxlrde

Jackson told the Tracker that while he and Montgomery were walking away from their parked cars that evening, police officers from the nearby Fifth Precinct shone flashlights on the photographers. Both put their hands in the air and identified themselves as members of the media, Jackson said. When they returned to their cars in the early hours of May 30, their tires had been punctured. They drove to a nearby parking lot, where they changed Montgomery’s tire (Montgomery did not respond to emailed requests for comment as of press time). Jackson, who didn’t have a spare tire, drove his vehicle to his hotel and called a tow truck the next day.

While he didn’t witness the incident, Jackson told the Tracker he believed officers were responsible because they had been the only people in the area when the photographers had parked their vehicles. Additionally, he said, on several occasions over the following days he had seen officers engaging in similar acts. When police officers “left their precincts to expand their security perimeters, they would puncture vehicle tires” along the way, he said. Spokespeople for both the Minneapolis Police Department and the City of Minneapolis declined to comment, telling the Tracker that the “incident is part of ongoing litigation.”

WCCO reporter Jeff Wagner tweeted about the tire slashings that night, noting in a follow up tweet that he couldn’t confirm whether law enforcement was responsible for the damage.

“If I tried walking up to the officers to ask, I would have been shot at w/ tear gas or a rubber bullet,” he wrote. “They were yelling at us to leave the premises.”

The Tracker is documenting several hundred incidents of journalists being assaulted, arrested, or having their equipment damaged while covering protests across the country. More than 30 press freedom aggressions in Minneapolis and St. Paul affecting 60 journalists have been documented since May 26. You can read them here.

Luke Mogelson, who was on assignment for the New Yorker magazine, told the Tracker that he parked his car on the shoulder of the South Washington Avenue overpass spanning I-35W in downtown Minneapolis on his way to cover protests at the nearby U.S. Bank Stadium on May 31. Other cars were parked in the same fashion, he said.

Many protesters dispersed at the arrival of an 8 p.m. curfew, but others marched to I-35W in the direction of Mogelson’s car, he said. Protesters “found themselves suddenly trapped: in both directions, a few hundred feet away, a wall of police obstructed the highway,” Mogelson wrote in an account in the New Yorker.

Video published by Canada’s Global News shows officers from at least three agencies deploying on the far end of the South Washington Avenue overpass as a crowd runs away. After officers form a perimeter on the block, several puncture the tires of a red car and then Mogelson’s silver rental car. The other cars that were parked near Mogelson’s car had apparently left before the video was filmed after curfew, he said.

Lt. Andy Knotz, a spokesperson for the Anoka County Sheriff, told the Star Tribune that Anoka County deputies punctured the tires on May 31 under orders of the state-led Multi-Agency Command Center, which was coordinating the law enforcement response to the protests.

Minnesota Department of Public Safety spokesperson Bruce Gordon told the Star Tribune that piercing tires was “not a typical tactic,” but “vehicles were being used as dangerous weapons and inhibited our ability to clear areas and keep areas safe where violent protesters were occurring.”

In a June 9 press release, the sheriff’s office said the order was given to deflate the tires of the “illegally abandoned vehicles” for the safety of law enforcement and protesters in the area, adding they “could have been used as deadly mobile weapons as seen on previous days.”

“That argument doesn’t really hold water,” Mogelson told the Tracker, explaining that his vehicle couldn’t have been a threat because it was surrounded by so many law enforcement officers in every direction.

Earlier that afternoon, a tanker truck drove through thousands of protesters marching on I-35W less than half a mile from where Mogelson parked his car, according to news reports. The driver was arrested and released pending investigation.

In the Global News video, Anoka County deputies wearing dark brown pants with a stripe puncture the tires with the assistance of another wearing a full camouflage uniform.

Lt. Knotz of the sheriff’s office told the Tracker he was uncertain which law enforcement agency’s officer was clad in the camouflage uniform. Gordon of the Department of Public Safety didn’t respond to requests for comment.

Mogelson told the Tracker he approached law enforcement officers from several local and state agencies, identified his car to them, and asked them not to tow it. He said he believed in retrospect that his tires were already punctured, but he didn’t realize it at the time. When he returned later to retrieve his car, he said a couple of officers laughed when he learned all four of his tires were punctured.

Mogelson left his vehicle and found a ride to continue reporting at a memorial for George Floyd, he said. The protesters he had followed were corralled at a gas station near the highway, he said. Police across the country have been using a maneuver called kettling to hem in crowds at demonstrations. About 150 protesters in Minneapolis that day were arrested, according to Mogelson’s New Yorker article and other news reports.

Mogelson later filed a report with Minneapolis police to make an insurance claim, he said.

Mogelson said he didn’t want to focus too much attention on the car. “It seems pretty clear they did not know it was my car when they slashed the tires,” he said. “A lot of journalists that were there in Minneapolis were physically abused, harassed and attacked.”

Information in this roundup was gathered from published social media and news reports as well as interviews where noted.

Lucas Jackson, a staff photographer for Reuters at the time, was hit by law enforcement with a pepper ball while covering protests against police violence in Minneapolis, Minnesota, on May 30, 2020.Jackson told the U.S. Press Freedom Tracker that he and other photojournalists had been documenting people throwing firecrackers at the Minneapolis Police Department’s Fifth Precinct and breaking into nearby local businesses on the night of May 29 and into the morning of May 30. At roughly 1 a.m. on …

George Floyd’s death in Minneapolis on May 25, 2020, ignited a sweeping assembly of protesters across the United States — and the globe — a staggering, monthslong outcry for police reform and racial justice. In many moments peaceful, in many others bracingly violent, journalists of all stripes took to documenting these demonstrations. At times, to do the job meant to expose oneself to the effects of riot-control agents, to face harassment from individuals or law enforcement officials, to fear for …
More related incidents