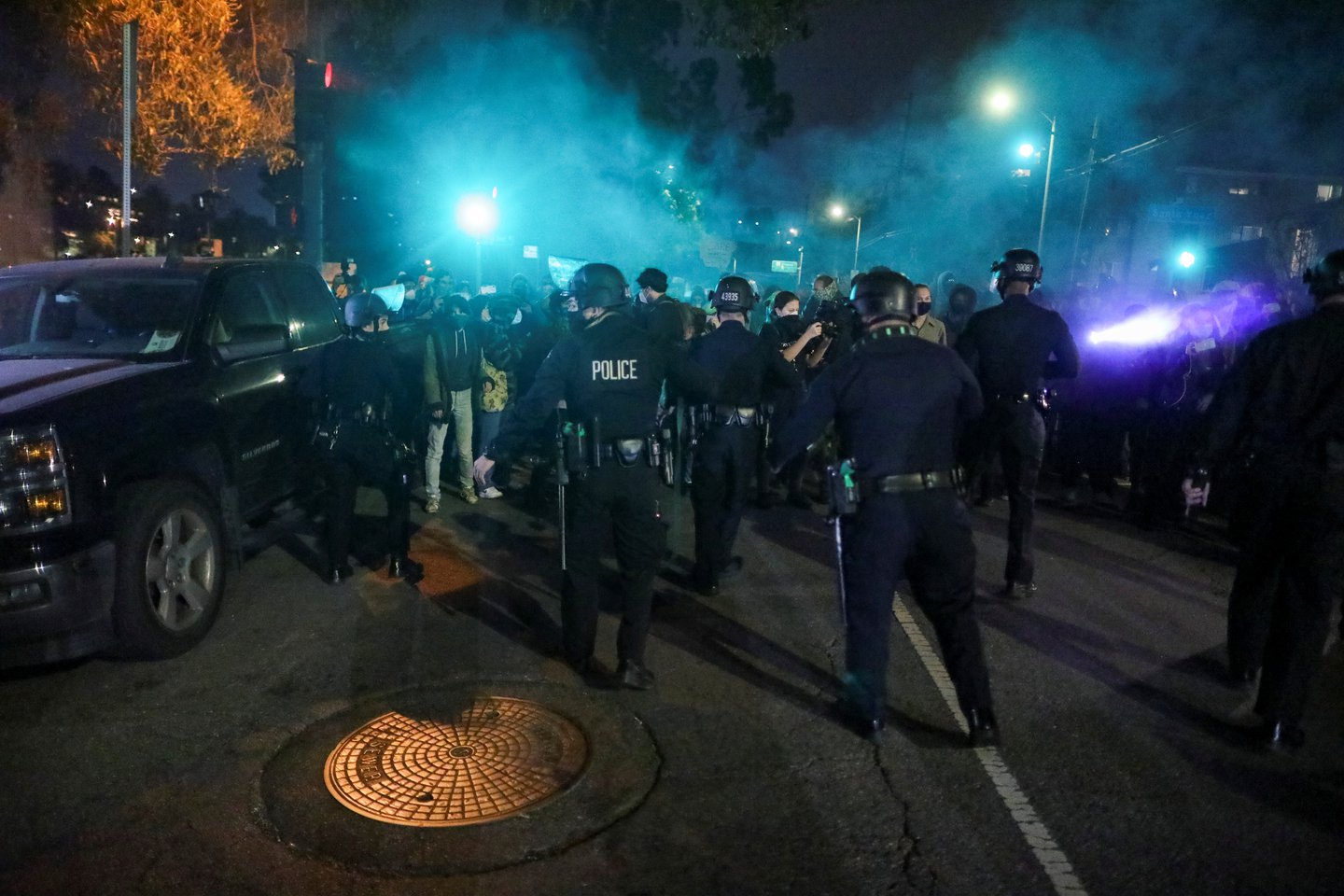 Los Angeles Police Department officers arrive at Echo Park Lake to evict homeless encampments on March 25, 2021. More than a dozen journalists were arrested or detained while documenting demonstrations against the evictions.

Independent videographer Sean Beckner-Carmitchel told the U.S. Press Freedom Tracker he was one of the journalists covering the demonstrations who became trapped with protesters in the police kettle.

In footage posted to Instagram, Beckner-Carmitchel narrates that the crowd has been kettled on Lemoyne Street between Sunset Boulevard and Park Avenue. He appears to be on a sidewalk as he films individuals standing in the street, who are arrested, one by one, by police. Approximately 38 minutes into the footage, officers approach Beckner-Carmitchel and ask that he come with them.

As Beckner-Carmitchel agrees and hands his equipment to one of the officers, some who remain inside the kettle can be heard booing and shouting that he is a member of the press. Beckner-Carmitchel can be heard telling officers that he is wearing a press credential from the National Press Photographers Association, which advocates for visual journalists in print, broadcast and digital newsrooms as well as freelancers.

Beckner-Carmitchel told the Tracker that before being loaded onto the bus, a public information officer who knows the journalist spoke with one of his arresting officers, but did not intervene to stop the arrest.

Los Angeles Times reporter James Queally — who was also detained that night — tweeted at midnight that Beckner-Carmitchel was still being held in police custody. In a subsequent tweet Queally said that the LAPD informed him that Beckner-Carmitchel was being held because the department “doesn’t recognize” the credentials he was wearing, and because he had not gone to a “media area” set up by police some distance away from the protest.

Only information I could get out is that LAPD doesn't recognize Sean's NPPA credential and another complaint about him not being in the media pen. He's not answering my texts either. Unfortunately, this means he's probably still in custody. https://t.co/D1lQVQMz4p

Beckner-Carmitchel told the Tracker that other journalists with NPPA credentials were released from the kettle without being arrested, and that, from the media staging area set up by police, it would have been impossible to see what was happening inside the kettle.

Beckner-Carmitchel later tweeted that he had been released shortly after 1 a.m. on March 26 with a failure to disperse charge, a misdemeanor punishable by up to six months imprisonment and a fine of up to $1,000, according to California’s penal code. Beckner-Carmitchel told the Tracker that he was the last person to be released from the open booking area at the Metropolitan Detention Center where he was processed.

His citation, which he shared with the Committee to Protect Journalists, a founding partner of the Tracker, orders him to appear for a hearing on July 30.

“My frustration right now is I could be cutting together 45 hours of footage and doing a report about the people of Echo Park Lake and the activists involved over the past two days,” Beckner-Carmitchel told the Tracker. “Instead, I’m talking to lawyers and checking my Twitter.”

At around 1 a.m. on March 26, as Beckner-Carmitchel was being released, the LAPD posted a statement specifically addressing the detainments of members of the press.

A spokesperson for the Los Angeles City Attorney’s Office told the Committee to Protect Journalists — a founding partner of the U.S. Press Freedom Tracker — that the office had not received a case charging Knock LA reporter Sean Beckner-Carmitchel with failure to disperse.

On April 7, Rob Wilcox, a spokesman for City Attorney Mike Feuer, told CPJ that the office had not received cases concerning Beckner-Carmitchel or the seven other journalists who received citations on March 25.

When reached for comment over the phone, a Los Angeles Police Department spokesperson told the Tracker that department policy is not to discuss arrests once paperwork has been filed but did not respond to further requests to confirm details about this arrest, including if any paperwork had been filed.

Beckner-Carmitchel was one of at least 19 journalists detained by police using a technique known as “kettling” while documenting protests near Echo Park Lake on that date. After police surrounded the crowd and announced everyone was under arrest, they began restraining people one by one and leading them out of the kettle.

Beckner-Carmitchel told the Tracker he identified himself as a journalist and had his press credentials clearly displayed when officers placed him under arrest. He was transported to the LAPD Metropolitan Detention Center, where he was processed and charged with failure to disperse.

Beckner-Carmitchel confirmed to the Tracker via Twitter message on April 27 that he was told by the City Attorney’s Office that the charges against him would not be filed.