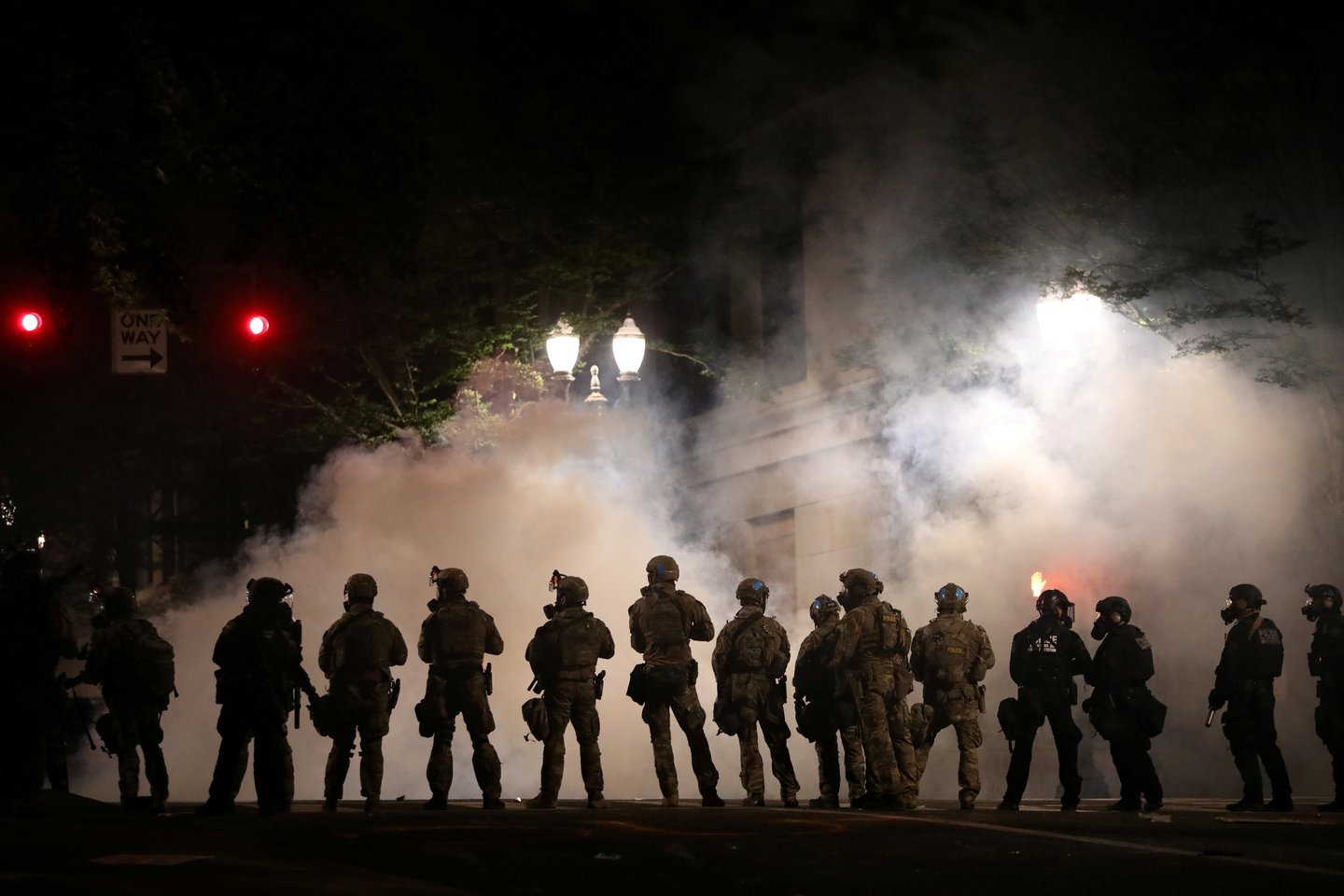 Each month, this newsletter opens with a snapshot of categories from our home page. This is what you saw on the last day of June:

And this is what our home page looked like on the last day of July:

These snapshots barely underscore what a tumultuous — and downright frightening — second full month it has been for journalists covering unrest across the nation since George Floyd, a Black man, was killed while in police custody in Minneapolis on May 25.

By the end of July, the Tracker team — working with partners and a diverse team of freelance reporters and editors — has published more than 130 detailed accounts of journalists assaulted, arrested and other aggressions while covering the protests. It’s worth noting that we’ve now published more assaults of journalists so far this year than our last 3 years, combined.

Find all Black Lives Matter documented aggressions here. We have several hundred more to go as we verify the more than 600 reported aggressions against the press.

We’re continuing to release via Twitter raw numbers and accounts of what is happening on the ground. 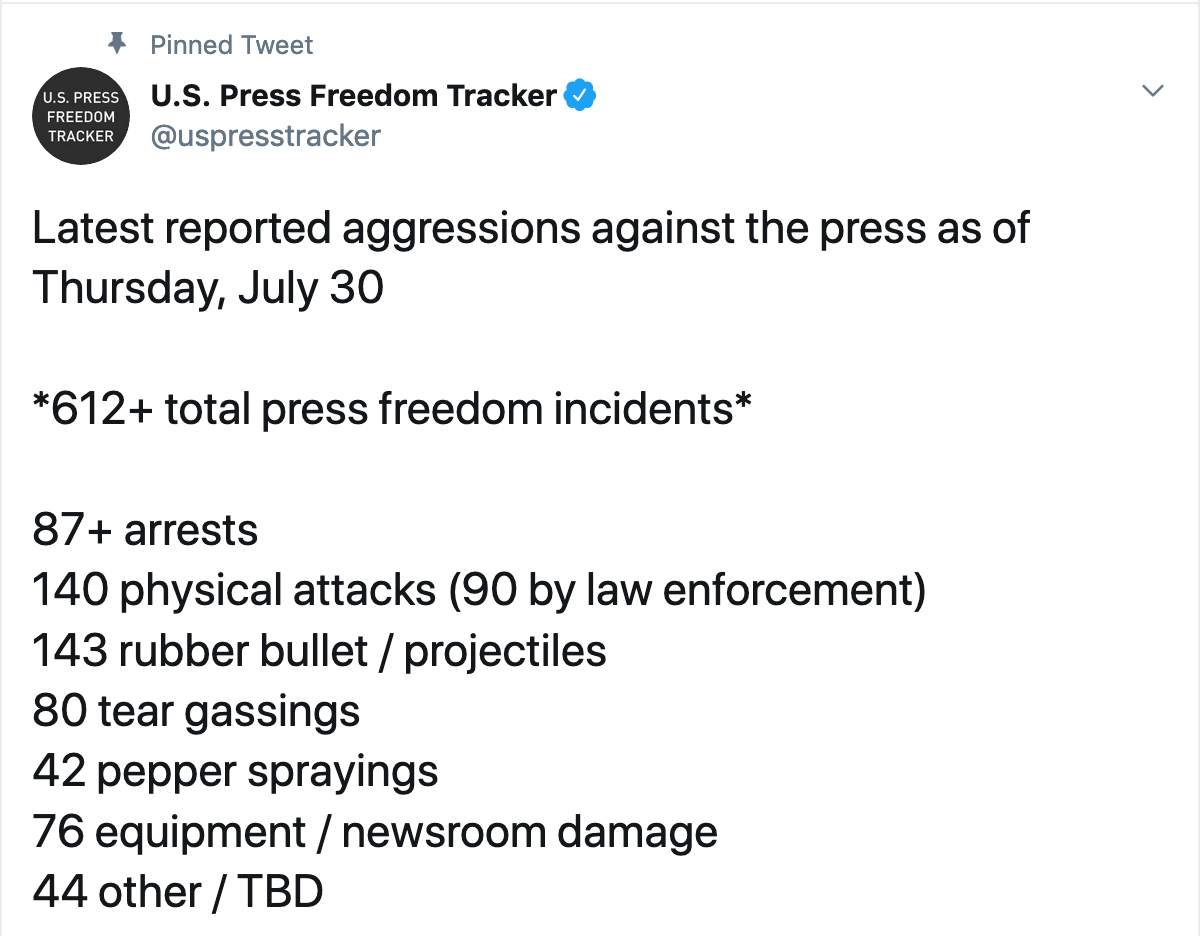 I told you last month that, “What’s happened in 70 cities in more than 30 states across the nation in one month is unlike anything we’ve seen in modern history and surpasses the Tracker’s entire 3-year history of documentation.” That statement only continues to be more true, impossibly. Reports of aggressions against the press have now topped 600, spanning 72 cities and 35 states.

One of those cities, Portland, catapulted in front of Minneapolis with the highest reported numbers of assaults against the press and the highest number of journalists hit with rubber bullets and other projectiles. This jump follows the arrival of Department of Homeland Security forces at the end of July and harrowing reports of agents in unidentified vans snatching people off the streets and targeting journalists.

Freedom of the Press Foundation’s Executive director, Trevor Timm, wrote about what’s happening in the city and a case brought by ACLU of Oregon, where a judge placed a temporary restraining order on the federal agency from attacking journalists or legal observers who are documenting the Portland protests.

“You might think: How bad is it for journalists covering Portland that a judge has to step in?” Timm wrote. “Very bad, and we have the data to prove it.”

At least six journalists reported being hit in the head or face with projectiles by law enforcement, 4 of those after the TRO went into effect on July 23. Since the end of May, nearly 90 aggressions have been reported to the Tracker from Portland, including 5 arrests and more than 60 assaults of journalists.

For a look at how other countries are viewing this unrelenting assault on press freedom — especially as many international journalists are equally assaulted and arrested — here’s my piece for World Politics Review:

More Journalists Are Being Assaulted in the U.S., Tarnishing America’s Image

Updates and Other Cases

In addition to protest-related aggressions, the Tracker continues its ‘regular’ work of documenting threats to press freedom. In July, this included the FBI charging six former eBay employees for their alleged participation in a campaign of harassment and intimidation against a husband and wife publishing team, the prior restraint — and its subsequent reversal — of a tell-all book by the president’s niece Mary L. Trump and a brazen cutting of KSTP 5 News crew's cable while they were live on-air reporting on coronavirus measures for Minnesota restaurants.

We also continuously update our database as incidents evolve. Some recent ones of note:

Before we wrap up for the month, a little story and a reminder about available resources.

My youngest daughter, who doesn’t believe the concept of bedtime directly applies to her, sidled up next to me one recent late night. She’s grown accustomed to me watching videos of journalists beaten, shot at and arrested at all hours of the day as we piece together the narrative of what’s happening and create this permanent record. Some such violent imagery was playing and replaying across my screen, and she asked if it gave me nightmares. I answered with a truthful, “Sometimes.”

For journalists, there are resources for helping with the different shapes of nightmares — emotional, physical and financial — that come from reporting during these tense times. Founding partner Committee to Protect Journalists lists many of those resources here.

Speaking of support… consider a donation to the Tracker to make our work possible.