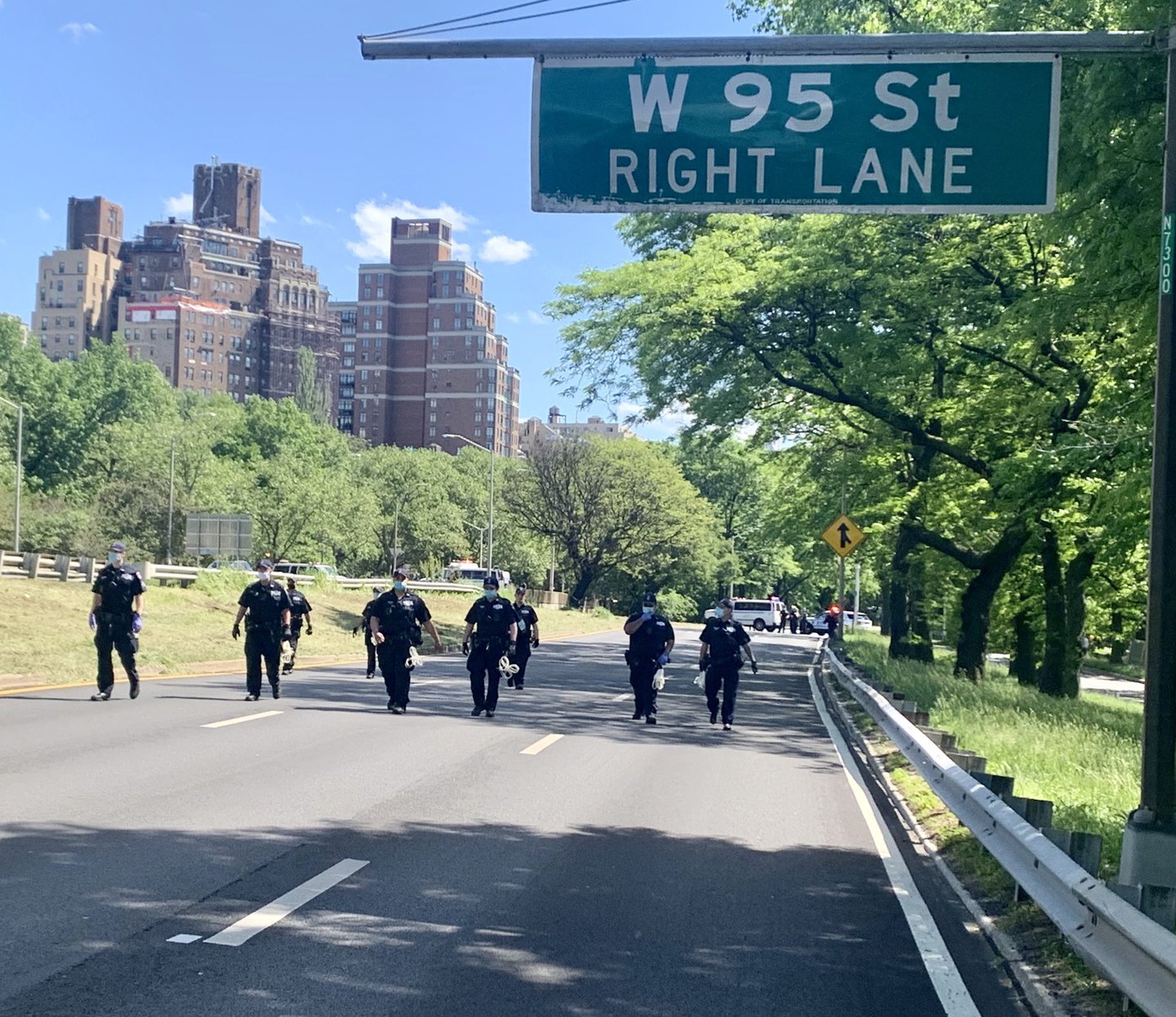 New York Police Department officers are photographed by Keith Boykin shortly before he was taken into custody.

CNN political commentator arrested by NYPD after identifying himself as press

Keith Boykin, a freelance journalist and CNN political commentator, was arrested while covering a protest in Manhattan on May 30, 2020, despite identifying himself as a member of the press.

The protest was one of many demonstrations sparked by the May 26 release of a video showing a Minneapolis police officer kneeling on the neck of George Floyd, a black man, during an arrest the prior day. Floyd was later pronounced dead at a hospital.

Boykin, who was an aide to Bill Clinton during his presidency, was documenting the protest for his own Twitter feed, as he has done for past protests. On this afternoon, Black Lives Matter demonstrators had gathered at the Adam Clayton Powell Jr. State Office Building in Harlem and marched west, eventually making their way up an exit ramp and onto the West Side Highway. Boykin, who was on his bike, had moved ahead of the protesters in order to photograph them when he encountered a phalanx of New York Police Department officers heading toward the group. They said something to the effect of “Get out of the way,” Boykin told the U.S. Press Freedom Tracker. He identified himself as a member of the media, and the officers walked by him, then turned around and arrested him.

“I said, ‘Why? I’m with the press.’ They said it doesn’t matter,” Boykin said, adding that he had a press ID with him but never got the chance to show it to the officers.

So here’s what happened today. The NYPD arrested me at 96th Street and West Side Highway while I was taking photos and video to post to Twitter. I told the police I was with the Press, they walked by me and then turned around and arrested me.

According to Boykin, officers placed zip ties tightly around his wrists and dropped his phone on the ground, cracking its screen. He was carried back to a police van, where they removed his face mask to photograph him, then placed him in the back of the vehicle, which was so hot that Boykin said he worried he would pass out, something he has a history of doing in high temperatures.

“Even being in the back of the van was traumatizing, because I thought of Freddie Gray and how he died,” said Boykin, who is black, referencing a black man who died in Baltimore police custody in 2015. “The whole experience was totally outrageous.”

After an hour in the van, Boykin said he was placed on a prisoner transport bus with other arrestees and brought to NYPD headquarters in lower Manhattan, where he was processed and placed in a cell with 34 other prisoners for several hours. Very few of them had face masks, Boykin said, and he worried that these conditions risked exposing them to the coronavirus.

“I was in that cell for four hours, never told what was going on, never given an opportunity to make a phone call,” Boykin told the Tracker, adding that he also wasn’t read his Miranda rights during the arrest. He was released at 9:30 p.m., six hours after his arrest, and given a summons to appear in court in September on misdemeanour charges of disorderly conduct and obstructing traffic.

After that CNN appearance, Boykin told the Tracker that he was contacted by the New York City mayor’s office, which apologized to him for his treatment. He has also filed a complaint with the attorney general’s office. But to date, the charges have not been dropped, and he is prepared to fight them in court. He said the NYPD also failed to give him his ID back with the rest of his possessions following his release, and he needs to figure out a way to retrieve that.

The NYPD did not immediately return a request for comment.

“I thought it was completely unbelievable and unacceptable,” said Boykin of the experience. “This was a clear violation of my First Amendment rights.”

CNN political commentator Keith Boykin announced on Twitter on Sept. 22, 2020, that the charges against him had officially been dropped, calling it “a victory for the First Amendment.”

Just got off the phone with my lawyer, @eliehonig, and I’m pleased to confirm that the charges against me from my arrest on May 30 (for covering a protest as a journalist) have finally been dropped. A victory for the First Amendment! Thank you for representing me, Elie. 🙏🏾 pic.twitter.com/gqtuhIeVmb

Boykin was arrested on May 30 in Manhattan while documenting a protest against police violence, despite identifying himself as a member of the press. He was charged with the misdemeanor charges of “walking on the highway” and “disorderly conduct -blocking vehicular traffic” according to a press release published by his attorneys.

“Through extensive negotiations with city officials, the Lowenstein team convinced the city to drop all charges,” the statement reads.

Keith Boykin, a freelance journalist and CNN political commentator, filed a lawsuit against the City of New York on Feb. 16, 2021, following his arrest while documenting a protest against police violence in Manhattan.

Boykin was arrested on May 30, 2020, while he was on a bicycle reporting. Despite identifying himself as a member of the press, he was charged with two misdemeanor charges — “walking on the highway” and “disorderly conduct -blocking vehicular traffic.”

According to Boykin’s complaint, the charges against him were dismissed on Sept. 9 and 14. The lawsuit alleges First and Fourth Amendment violations, detailing his six hours in police custody and his fear of “further obstruction, harassment, and detention by the NYPD.”

Boykin and the city were engaged in settlement discussions which broke down in November 2021, and the city filed a motion for judgement and dismissal of the complaint on Nov. 15.

Russian freelance journalist Yana Mulder was reporting on protests in the New York borough of Brooklyn on June 4, 2020, when she was arrested while trying to intervene in the violent arrest of her husband. Mulder said she told police that she was press and that her husband was assisting the TV production crew.The protest came one day after New York City Mayor Bill de Blasio imposed an 8 p.m. curfew aimed at controlling escalating unrest in the city. Essential …
More related incidents