At least two news vehicles were vandalized amid protests against police violence in Kansas City, Missouri, on May 31, 2020.

KSHB 41 Action News reported that one of its vehicles was parked near the intersection of 46th and Main streets when it was vandalized and set on fire. In its request for tips, the Kansas City Police Department posted on Twitter that it occurred at around 9:30 p.m.

KSHB reporter Megan Strickland published a video of the burning car on Twitter. Lines of spray-painted graffiti were also visible on the hood and passenger doors of the Ford SUV. 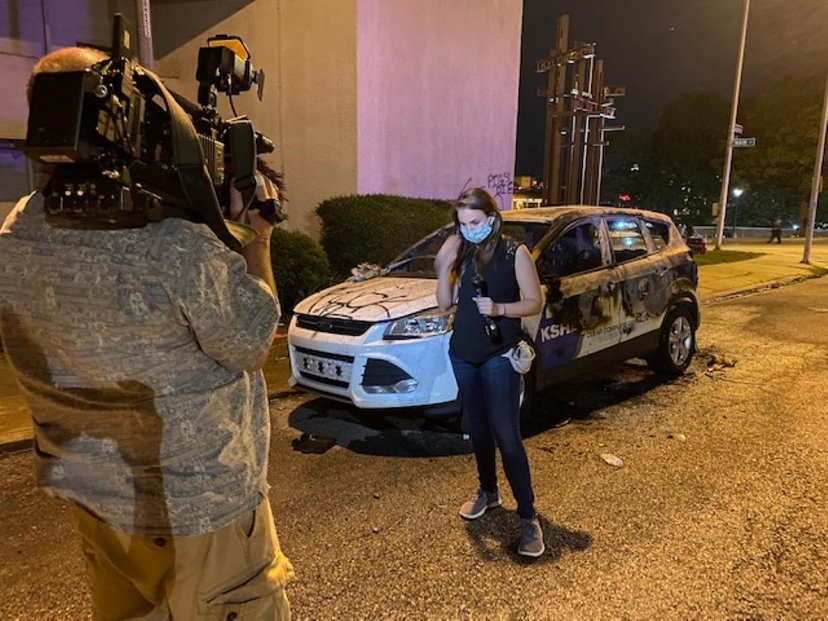 A KSHB 41 Action News team films a standup in front of the burned out remains of its news vehicle after the car was vandalized amid protests on May 31, 2020. KSHB 41 NEWS/KATHLEEN CHOAL

Choal told the Tracker that prior to the fire, several KSHB journalists had rocks, bricks and water bottles thrown at them, but no one was injured.

“Journalists find themselves facing more aggression and hostility while documenting history,” she said. “However, this has not diminished their passion to tell the stories of the amazing Kansas City community.”

KCPD spokesperson Capt. Dave Jackson told the Tracker they were working on the cases, but that the Bureau of Alcohol, Tobacco, Firearms and Explosives had taken the lead on the arson investigation.

A KMBC 9 News vehicle was also vandalized that night. The Tracker has documented that case here.